The future is here! With commercial space travel getting ever nearer, Richard Branson’s marketing team invited us to develop the Virgin Galactic design for print communications, detailing the latest developments.

The eagerly-awaited marketing and promotional materials consists of a 5-colour brochure with DVD, a flyer and limited edition HD laminated, foil-blocked box for which we also commissioned all print and production.

Featuring new images of the VMS Eve mothership and VSS Enterprise spacecraft in flight, exclusive photos and quotes from the future astronauts, and the first visual of the Foster + Partners designed Spaceport America in the New Mexico, the brochure was designed to fulfill the brief from Virgin Galactic – to communicate that commercial spaceflight is no longer a dream, but a reality – and indeed, that ticket deposits are now accepted. The test flight programme for the new space vehicles is currently underway, prior to the start of the world’s first regular commercial manned spaceflight service.

The brochure design is based on a structured yet flexible grid allowing a lively, considered layout and features stunning imagery and muted colour palette.

The Virgin Galactic brochure features:
• A foldout cover detailing the history of spaceflight
• Centre section throw-out illustrating the journey into space with relevant altitudes
• Explanations of the actual experience (e.g. how travelling at 4 times the speed of sound and floating in zero gravity really feels)
• Information about technology and safety issues
• Our choice of classic but poignant quotes about discovery and exploration from authors like Mark Twain which pepper the pages, together with quotes from the likes of Burt Rutan – the aeronautical design inspiration for the launch system and founder of Scaled Composites where the mothership and spaceship were built.
• Wide, asymmetric photo borders (influenced from the iconic images taken from the Hubble telescope which were often seen with ‘staggered’ borders when imaged together).
• Back cover throw-out with the Virgin Galactic Girl logo!
• Printing in 4-colour process with silver, and gloss sealer throughout, plus a high-gloss laminated cover to represent the spacecraft.

The limited edition, hinged box houses the brochure and features the original Virgin Galactic logo inspired by Philippe Stark plus metallic foil blocking of the ‘DNA of flight’.

“We wanted the box to represent space, and the brochure to represent the spaceship, so we have designed a black box with an HD laminated finish to give a tactile, rubbery matt feel, revealing the hi-gloss, predominantly white, brochure for an interesting combination of textures and finishes”. Paul West, Form. 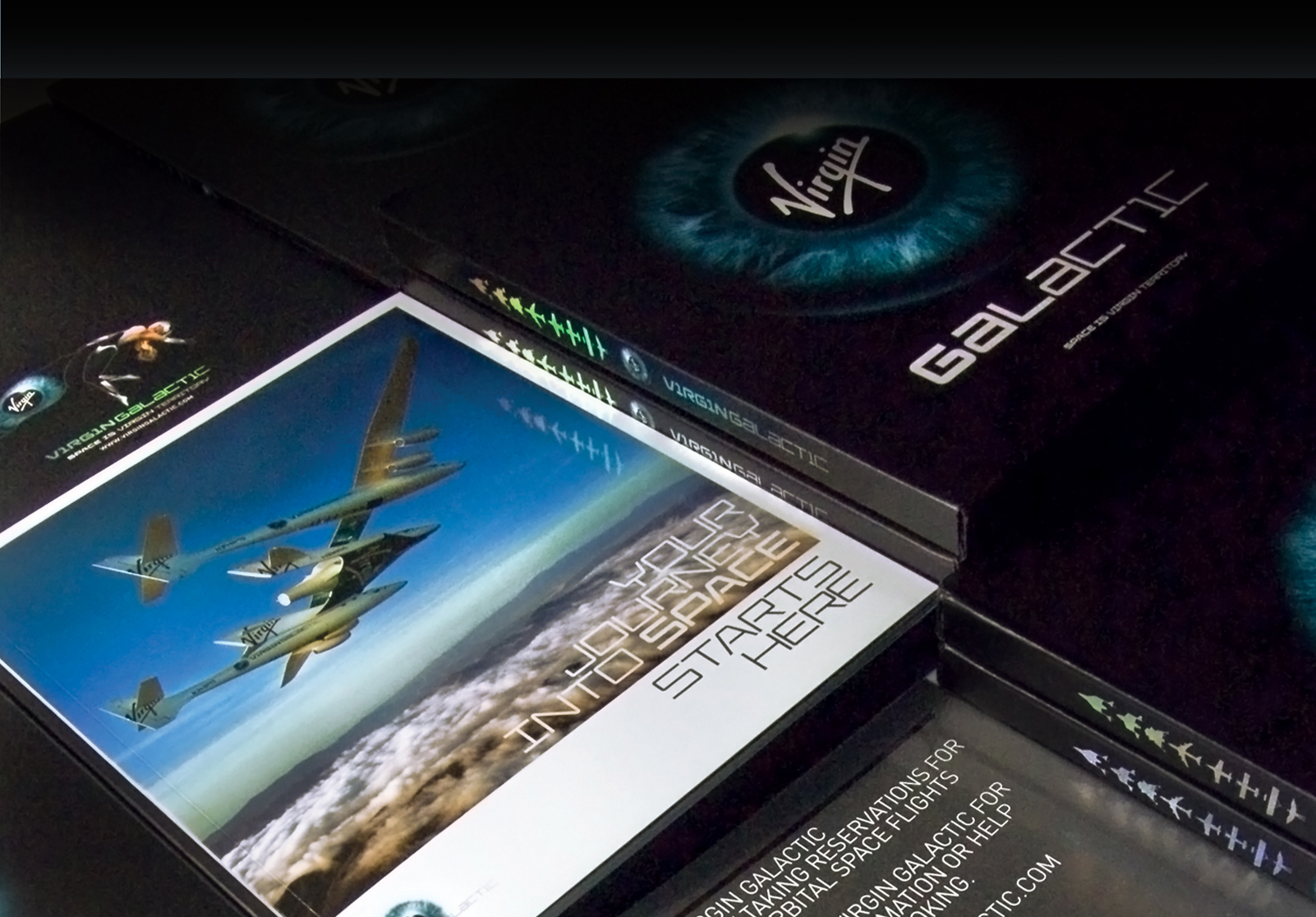 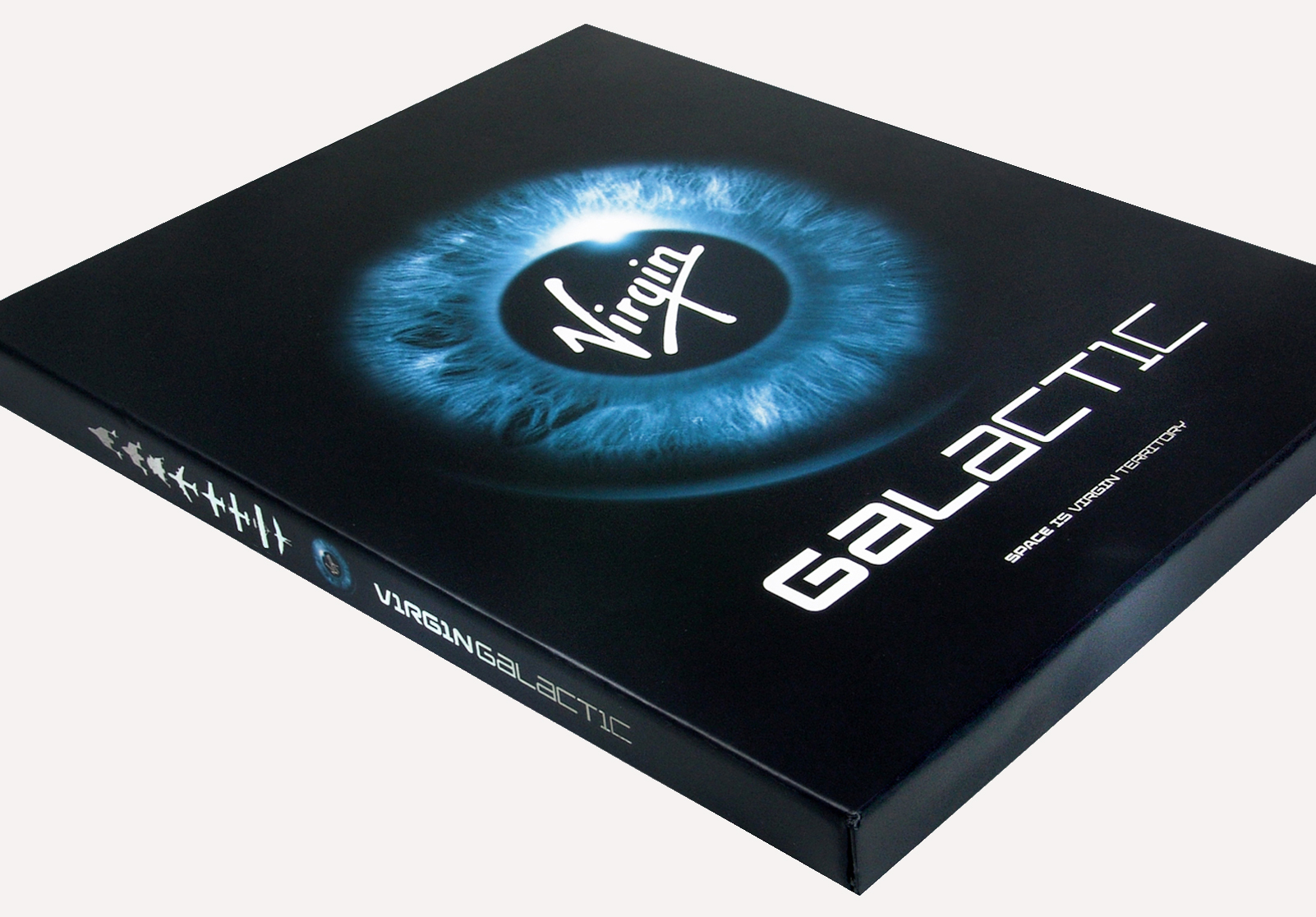 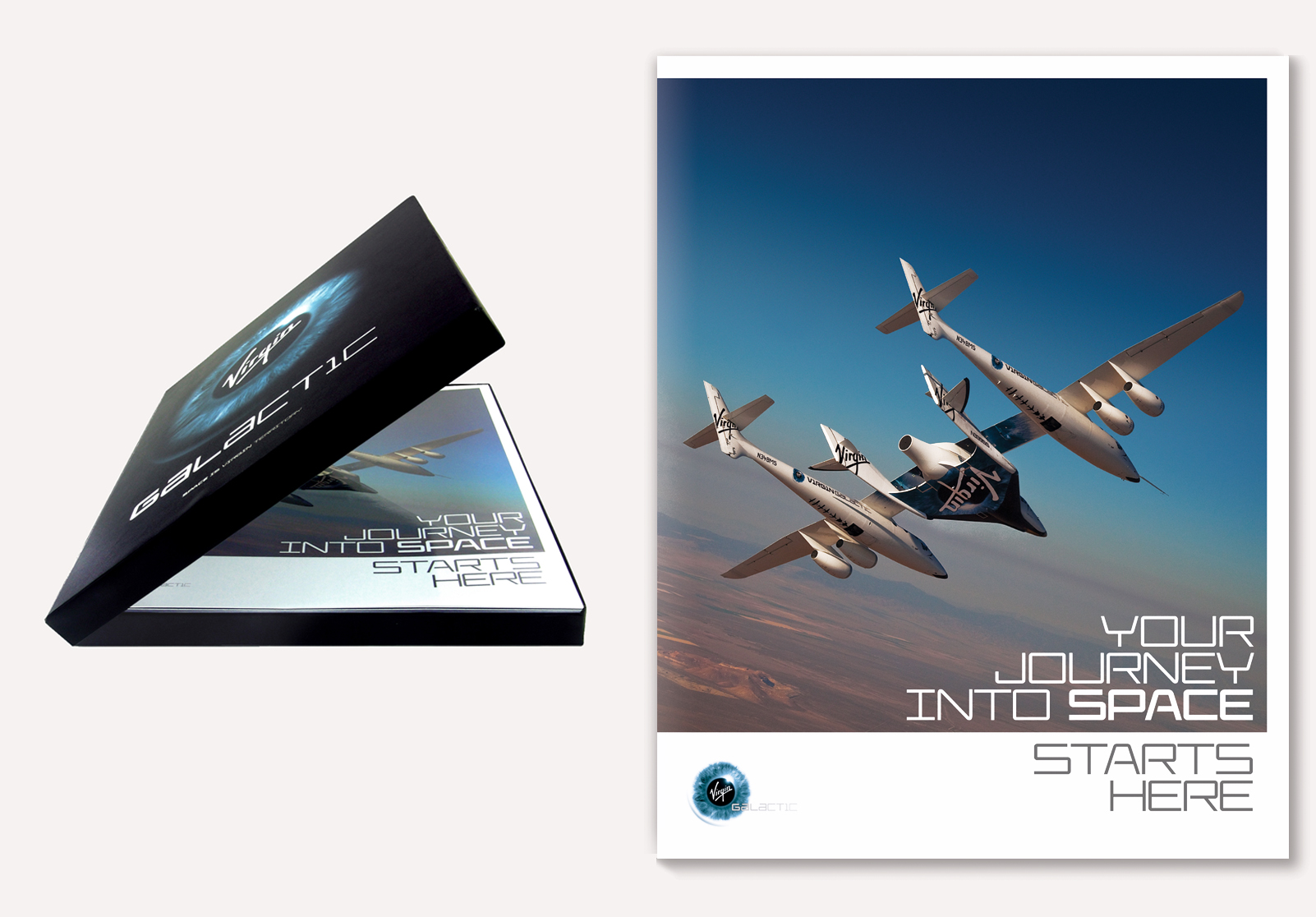 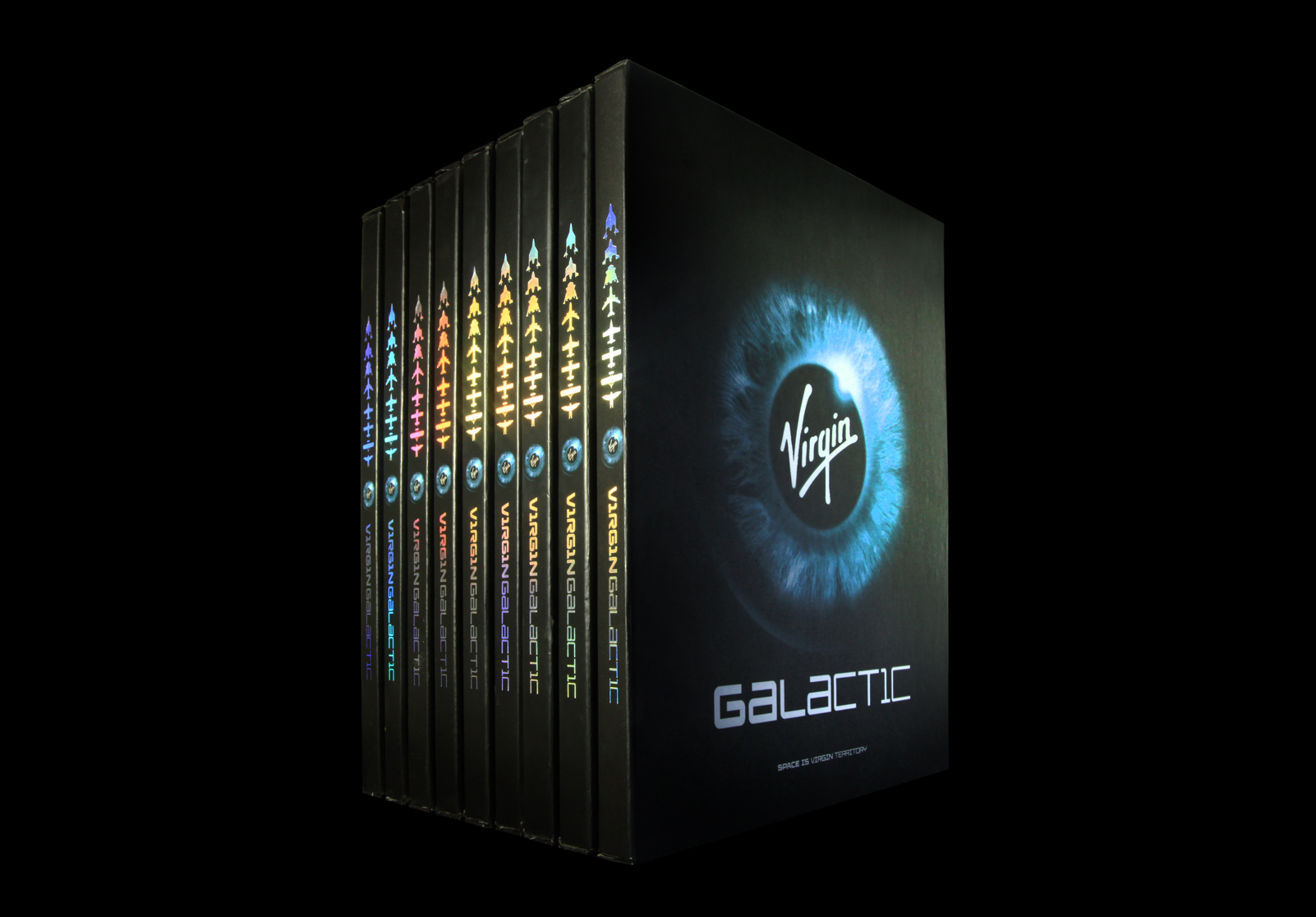 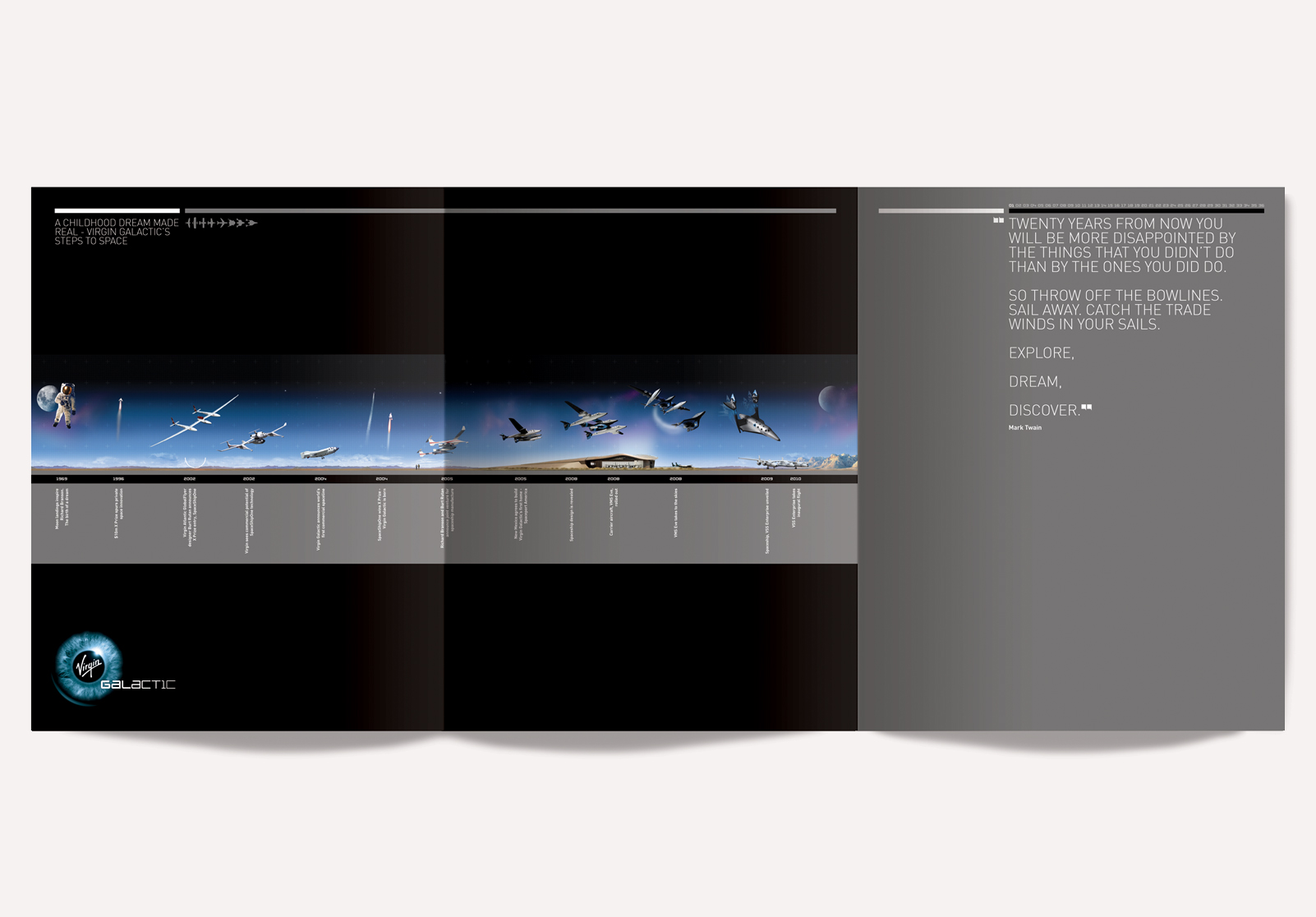 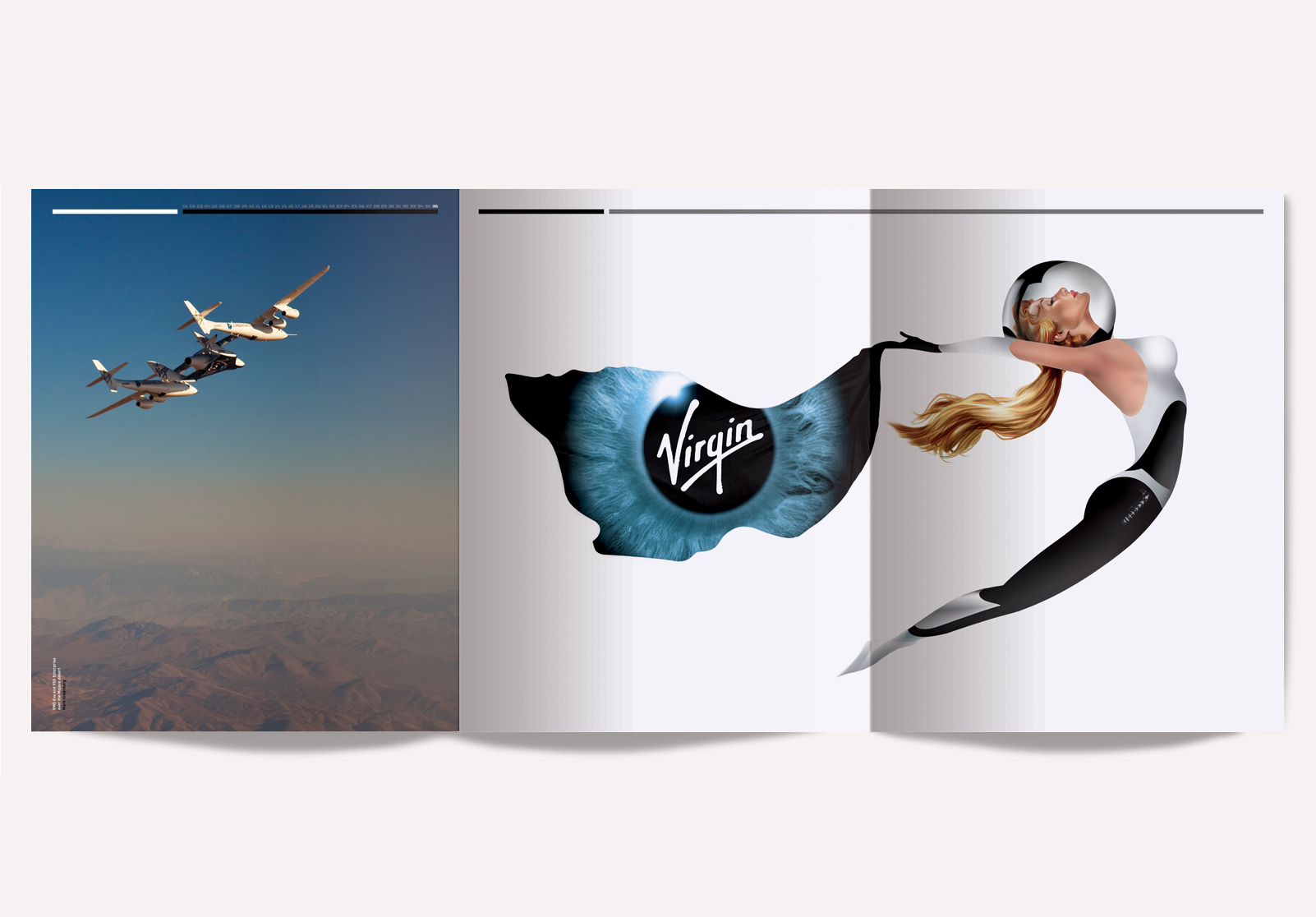 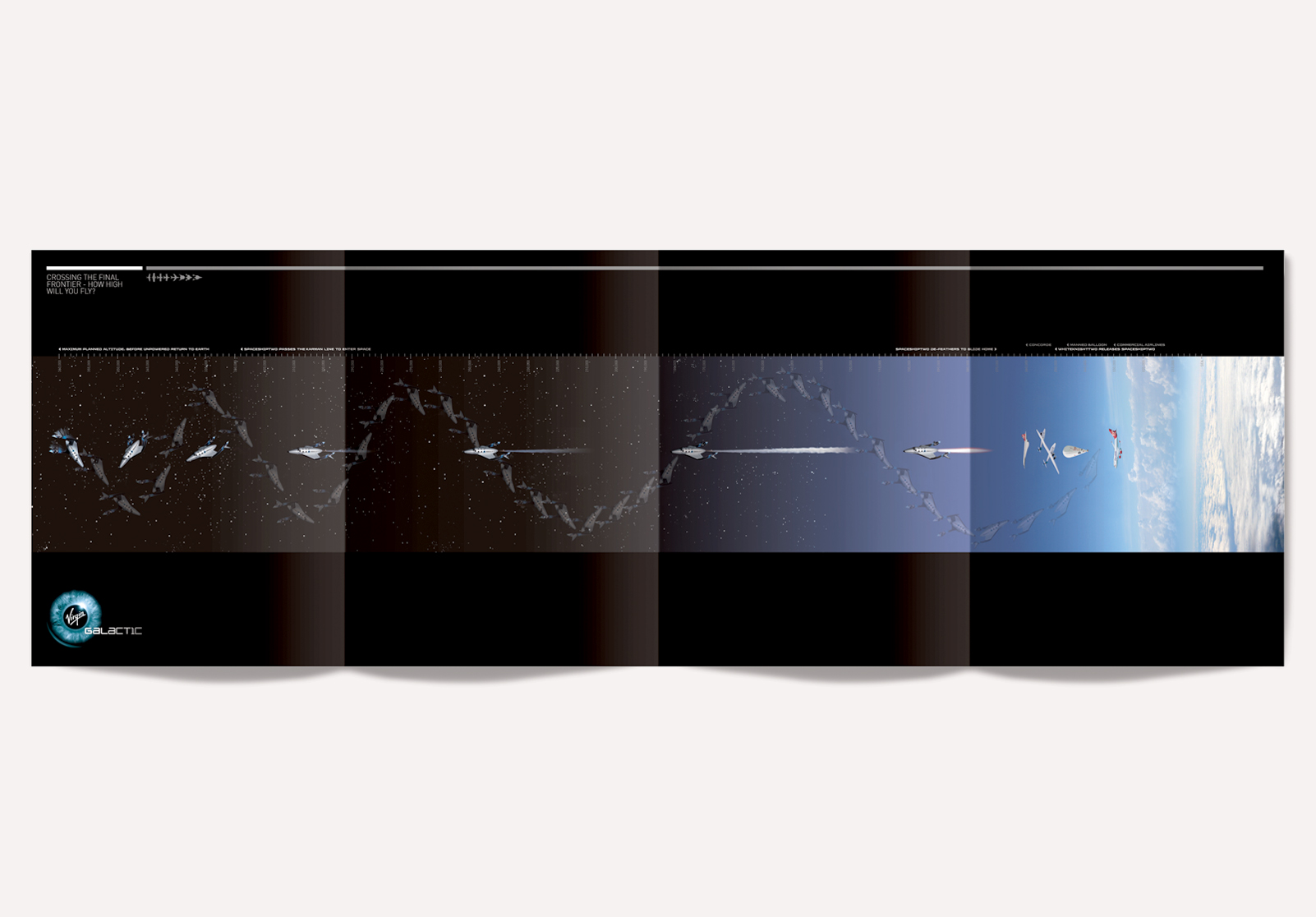 Form really understood the brief and their enthusiasm was contagious which led to the fantastic results which everyone has been delighted with. The final product is fantastic - a true representation of Virgin Galactic