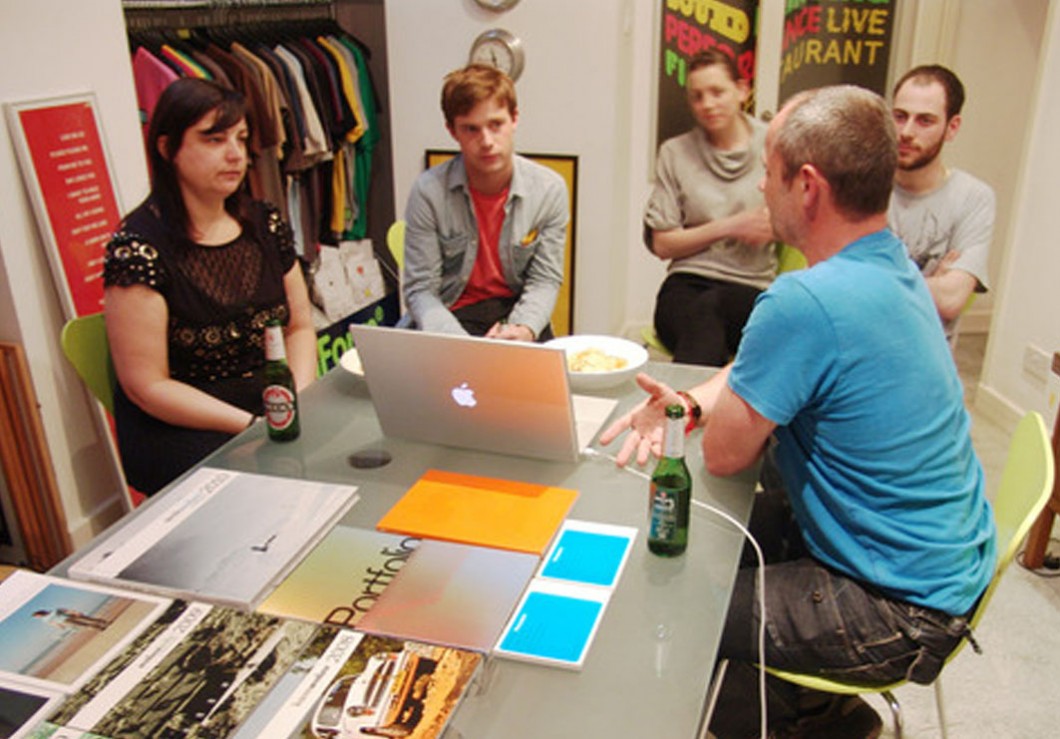 When time allows, we invite experts in the fields of image making, design and production to talk us through what makes them tick, over a few drinks in our studio. It’s all very informal, a bottle of wine and sitting back to hear how people have carved their careers. Over the years we have had enlightening and insightful talks from Paul Davis, Anthony Burrill, Nova Dando, Spiros Politis and Alfredo Falvo to name but a handful. What we really like about the InForm’s we hold is that fact that given an opportunity, everyone seems to relish the chance to talk openly and honestly about their work, where things have gone to plan, but more interestingly, where an opportunity has arisen too good to pass that has been ‘chanced’, and that gamble has been the life-changing moment in a career.

Last night it was the turn of Iain Crockart to show us his portfolio and talk about his life as a graphic designer before changing his career in early 2003 to wear the hat of a photographer. I’ve known Iain since 1984 and am proud to call him my oldest friend – well, we’ve known each other longer than we haven’t! After meeting in the Ralph West Halls of residence in Battersea, we went to college at the – then called – LCP on the 3 year BA Graphic Design course where we learnt our respective crafts. At the time I was aware that Iain would often go for a photographic solution to his work. It wasn’t unusual: we all did in varying degrees, but there was always something more ‘exploratory’ in the way he worked.

Iain showed us some examples of his early college work and it was plain to see in hindsight that he was honing his skills for his future vocation. After we left college in ’87 Iain went straight to Carroll, Dempsey and Thirkell (renamed CDT Design Ltd) where he rose to the very top and forged a reputation as an all round ‘people person’, the contacts he would later use when he became ‘supplier’ as a photographer to most of the top agencies (The Partners, Lambie Nairn, M&C Saatchi) in the design and advertising world, working on all manner of campaigns for (O2, Nokia, Goldman Sachs, Virgin Atlantic, Ernst & Young, Sainsbury’s, Unilever). Always conscious of how easy it is to be ‘pigeonholed’, self-initiated projects are regularly undertaken: the most recent being his iconic shot of the ‘hung parliament’ noose dripping the main party colours that was snapped up by the Independent on Sunday. Over the past few years he has embarked as ‘punter with camera’, only to become the official photographer for Global Enduro: the motorbike experience company which has taken him to the Himalaya’s, Africa, Cambodia and the Arctic Circle capturing truly breathtaking shots of motorcyclists pitting their will against the harshest, unforgiving terrain – hard enough to capture until you realise that on top of this, Iain is ALSO doing the same ride!

The sheer breadth and diversity in Iain’s work is too great to detail here. The inspiring thing about Iain is his energy, commitment to his vision, and his love of life. Check out his website to get more of an idea, and you’ll see what we mean. —PW—