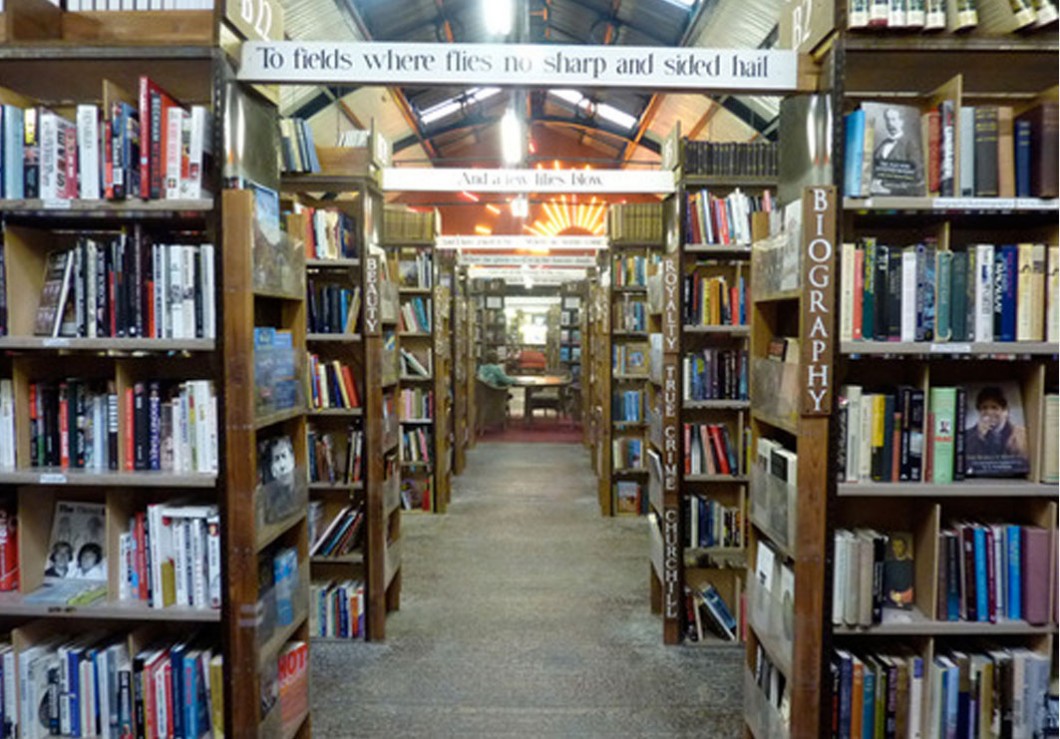 I love books. I must confess I don’t read very much, but I do love books. I love that each and every one of these paper parcels represents a perfect package of potential – of information, ideas, opinions, stories, words, pictures, design and typography.

Barter Books in Alnwick, Northumberland, is one of the largest secondhand bookshops in Britain. But it’s so much more than that. Housed in a beautiful Victorian railway station, this shop is a real experience. As soon as you enter through the old station Parcels’ Room an eclectic world unfolds – hundreds of thousands of books on every subject extend onwards through 6 more rooms including the restored old Waiting Room. There’s also a large selection of rare and antique books, as well as maps, music (CDs, cassettes and vinyl), second-hand DVD’s, a children’s room – and a model railway runs on a track above head height.

The shop has open fires roaring in winter time, several sofas, chairs and red velvet banquettes on which to flop and read, or simply soak up the atmosphere and the good music that’s usually playing (they were playing Led Zep last time I was there). Or indeed have a sarnie and slice of cake in one the tea rooms, and fresh coffee is also constantly being brewed in the entrance room. Large murals adorn the walls such as The Famous Writers mural painted by local artist Peter Dodd which consists of more than 30 life size portraits of famous writers. They also host also regular talks and a book group.

The name Barters Books comes from the barter system it still uses whereby customers can exchange their books for credit against future purchases, ‘though you can of course just buy with cash.

Owners Stuart and Mary Manley are also responsible for the resurgence of the ‘Keep Calm and Carry On’ poster. In 2009 Stuart discovered a rare original of this long forgotten WWII poster in a old box of books at an auction. Mary had it framed and displayed it in the shop where it’s direct design and compelling slogan was apparently an instant hit. A year later they started selling copies which were soon, in turn, copied and parodied in their millions, by many others around the UK.

On my last annual visit, I found myself drawn to the vast selection of Penguin paperbacks – also such simple, bold cover designs with their infamous orange and white panels, and also much parodied (even by ourselves for an inside page of Mr Hudson and The Library’s album a few years ago: http://www.form.uk.com/portfolio/music/miscellaneous/mr-hudson/album-booklet/). What I came away with however, was a great book of architectural photography by Julius Schulman and a few DVDs. Paul added to his vast 7” vinyl collection with The Shins’ Australia, John Kongos Tokoloshe Man (covered by Happy Mondays) and New Musik’s Living By Numbers. Also on display was a pristine copy of Rolling Stones Goats Head Soup which always reminds of of a shoot we did with an Island Records artist in Spain a few years back, who could only get into the vibe in front of the camera by listening to that album.

As high street shops continue to search for ways to create more of a retail ‘experience’ to attract customers, some do with taking a leaf out of Barter’s Books (no pun intended!). Predictive text for ‘Cool ‘is ‘Book’, and this shop has heaps of both.