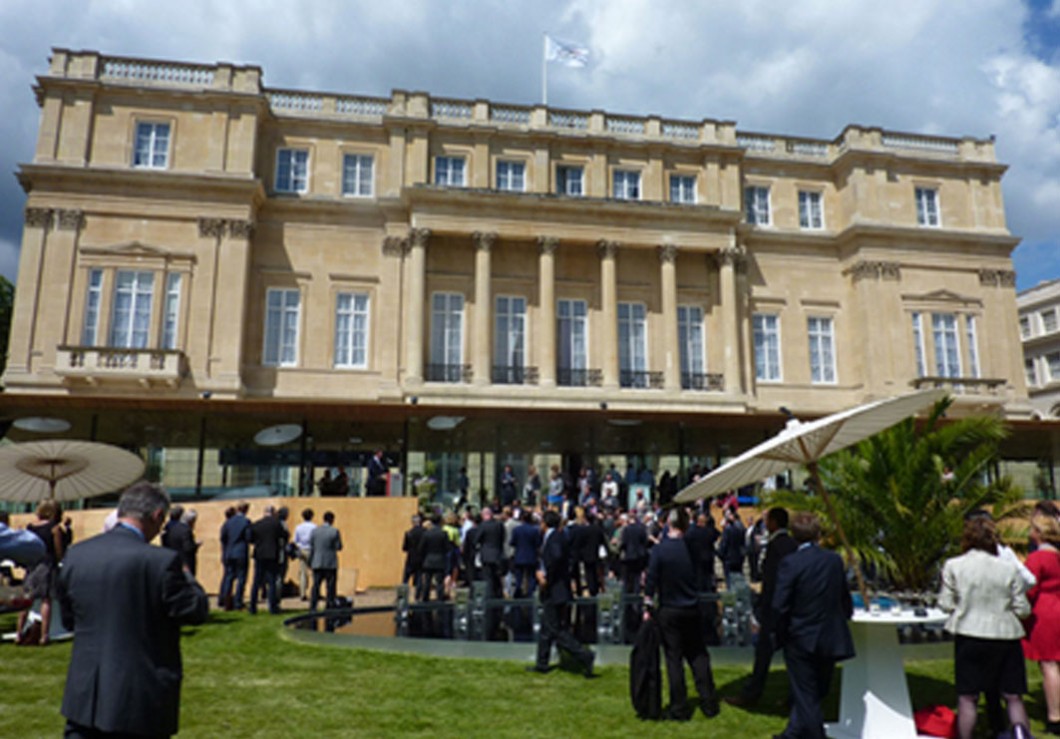 Heatherwick and Ive at CSS

A few weeks ago I was invited to the Creative Services Summit at The British Business Embassy, a series of global business gatherings billed as the “largest and most ambitious set of trade and investment events ever held in this country” where, during the six weeks of the Olympics, 17 global business summits were hosted – I attended the Creative Services day. Since we have some hugely influential and exciting creative things going on here in Blightly (the UK is the  largest design community in Europe don’t you know) there was some interesting topics being discussed. The regal venue – Lancaster House (which is a ‘body’ double for Buckingham palace in films including The Kings Speech), had been transformed into a hotbed of creativity with the walls and floors covered with art and furniture from some of UK’s finest designers, not to mention the jaw droopingly beautiful Aston Martin DB5 parked up outside (I don’t even drive but this car is really something very special). Architects Waugh Thistleton also designed a beautiful temporary timber and glass Pavilion in the grounds which added a light and modernist twist to the 19th Century building, whilst also serving to link the house and garden. Speakers included Sir Martin Sorrell, Lord Richard Rogers, Rita Clifton of Interbrand, Spencer de Grey of Fosters+Partners, Simon Waterfall, Paul Priestman of Priestman Goode and many other creatives of note, but some of my personal highlights came from Thomas Heatherwick (designer of the Olympic Cauldron and the new 38 London bus to mention but a few highlights of his glowing career) and Sir Jonathan Ive (of Apple fame).

Here are some points that resonated with me:

Jonathan Ive
– talked about how drawing as a kid led him to a process of working out problems – he didn’t realise til much later this it was “design”.
– “so much is on a plate for young people these days” – he wonders if a sense of searching and discovery is what makes people good at what they do in the end.
– pointed out how if we can’t use something we assume it’s our own problem – where as in fact if it’s well designed it should be easy to use – it’s about the design not our own problem if we can’t use something.
– did you know apple is worth more than the sales of Electricity sales in the US? (see http://thingsappleisworthmorethan.tumblr.com/)
– he swears Apple’s goal is not to make money – but to make good products – that people will like – and if operations are set up correctly then money will be made as a bi-product.
– “good design and innovation is actually really hard” – if you’re innovating, it won’t have been done before, so you will naturally come across barriers and difficulties.
– Apple has large revenues but only a very small number of products – each product has huge amount of investment and care. the real hallmark is care.
-His design process is: from a tentative thought, to a conversation, to an idea very quickly – amongst a very small number of people. A good idea galvanises people and small teams work best for that.
– Focus groups guarantee mediocrity (this is music to my ears btw). its our job as designers to make something good and make something that people want – its our responsibility.
– He is often driven by hating a product – and wanting to make it better
– Importance of being aware in your gut when something is just OK – and having the willpower to push it to be great. “good is the enemy of great”.

Heatherwick:
– London buses are as much a part of the architecture of London as the British Museum… Rita Clifton:
– An office environment is as much a statement of brand than their shops (talking about retailers).
– Shopping centres are becoming much more of a destination than just somewhere to shop – they are now civic spaces.
– the physical environment has a real effect on people.
– Churchill – ‘we shape our environment and thereafter they shape us’.

Paul Priestman:
-The chairman of Singapore airlines interviews every single air hostess (such is his belief that they must truly represent the brand).
– In Japan they have train seats that turn round so you always face forward
– hopes that short haul air travel will soon be replaced by train travel

After some lunch on the grand lawn in the sunshine, a speech by Ed Vaizey, Minister for Culture, Communications & the Creative Industries at DCMS, and some chats with fellow designers –  I sadly had to miss the afternoon sessions to hot-wing back to the Form studio – my brain full of stimulating stuff!