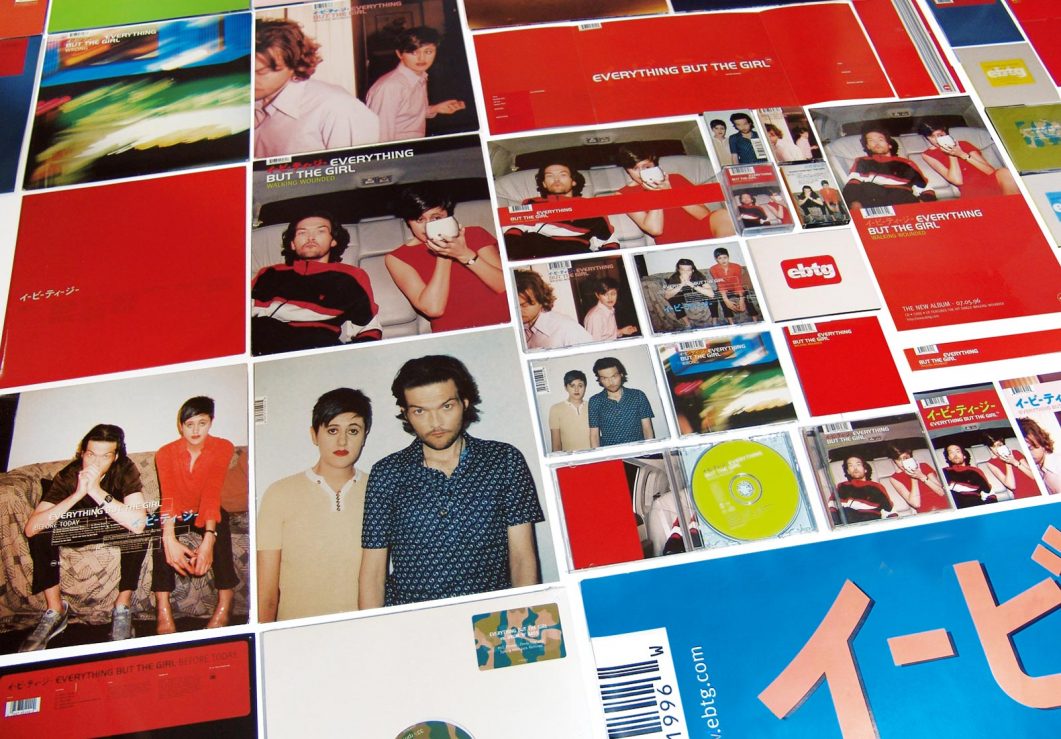 Everything But The Girl ‘Walking Wounded’ reissue

November sees the reissue of ‘Walking Wounded’ – Everything But The Girl’s era-defining million-selling classic album which we first designed in 1996. Recreating the vinyl artwork for this remastered record release prompted us to open up the archives and share our work for the original award-winning campaign.

After Todd Terry’s 1996 remix of EBTG’s ‘Missing’, and Tracey Thorn’s legendary collaboration with Massive Attack, Everything But The Girl reinvented themselves as an era-defining band riding the commercial tip of the new drum’n’bass wave. “We were writing in reverse – mood first, then songs, learning as we went along. It just felt like a new frontier.” Ben Watt told The Vinyl Factory.

We’d been working extensively with Virgin, their original record label, on other projects and in winter 1995 we were sent a couple of tracks (‘Walking Wounded’ and ‘Wrong’) on cassette to listen to for inspiration while we worked on initial ideas for the campaign pitch we eventually won.

Ben Watt came to the studio regularly during this period of design as the  creative process was incredibly important to him. We were presented with a series of stunning images by the photographer Marcelo Krasilcic, who’d spent time with Ben and Tracey Thorn in New York (capturing them in a fly-on-the-wall, reportage style).

We particularly liked the fact that the images were ‘real’, with no retouching or glamorisation, and we spent time editing down what we felt were the most iconic. The saturated grittiness of the shots demanded a typographic treatment that would stand out and become recognisable as a mast head to the campaign.

We were virtually living in record shops, buying volumes of vinyl or CDs at the time and we were always drawn to the Japanese import section for the packaging and the unusual way the CDs came shrink wrapped with card slip cases featuring barcodes on the front, printed in process colours with Kanji scripts and modular ‘western’ fonts.

We combined this import aesthetic to the images and EBTG were ecstatic with the results so this forged the direction for the whole campaign including four singles (‘Walking Wounded’, ‘Wrong’, ‘Before Today’, ‘Single’), postcards, posters, adverts and in-store point of sale.

The campaign won Best Art Direction of a music project in the 1997 Music Week CADs.

This album (and era) remains incredibly special to us as we were absorbed with the drum’n’bass scene at the time. From harder D’n’B at The Glade in Glastonbury Festival to a more ambient IDB at Amsterdam’s Milkweg we were working with bands, producers and managers exploring the new sounds and it was particularly exciting hearing EBTG collaborations from Omni Trio, Dave Wallace and Springheeled Jack.

The new vinyl edition of Everything But The Girl ‘Walking Wounded’ has been mastered by long-time EBTG mastering engineer, Miles Showell at Abbey Road Studios and is available on vinyl as from Nov 8th here.

You may also be interested in Pitchfork’s article on the album.