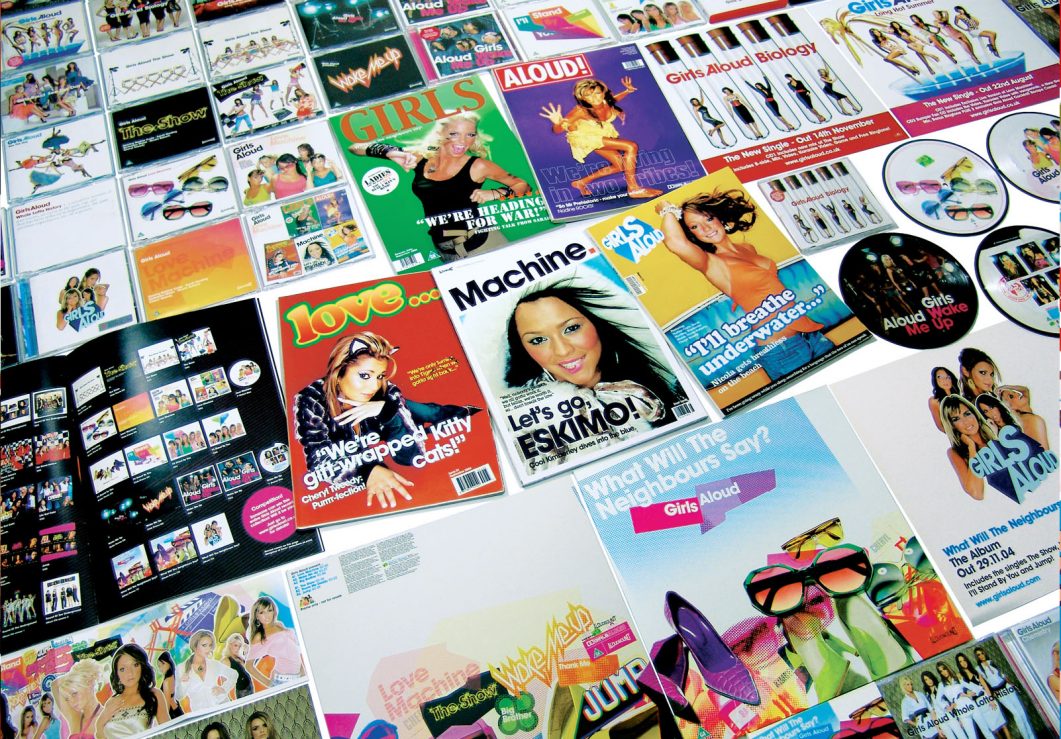 A behind the scenes look into the making of the What Will The Neighbours Say? and Chemistry campaigns, 2004-2006.

Girls Aloud were one of the most important and successful pop bands of a generation. Cheryl Cole, Nadine Coyle, Sarah Harding, Nicola Roberts and Kimberley Walsh were originally formed as a band on reality TV show Popstars: The Rivals in 2002, achieving a string of twenty consecutive top ten singles in the UK (including four number ones) and seven albums, two of which reached number one. It was a wonderful era working with the band and Polydor Records as their art directiors and designers for the covers and marketing campaigns over two albums, eight singles and two tours.

Despite disbanding in 2013, the band still have an avid fan base and following a recent podcast interview Form partner Paul West gave with You Can’t Mistake Their Anthology; The Girls Aloud Commentary Podcast we delved into the archive of our design work to bring you an in-depth Girls Aloud post with a few ‘behind the scenes’ shots never published before and some interesting anecdotes along the way.

In early 2004, we were approached by Polydor Records, who briefed us to help us take Girls Aloud to the next level. They were already two years into their career (after coming second in Popstars: The Rivals), and the second campaign required a jolt of energy to make them household names.

We pitched a number of creative routes to the label. One of the concepts we presented pastiched film posters with groovy filmic logos (see above) and our suggesting was to shoot the Girls to capture their personalities with empowering, feisty and slightly kitsch photographic angles. This was the hands-down favoured route. In true film poster style we proposed each record cover would ‘star’ Nadine, Cheryl, Sarah, Kimberley and Nicola by including their names on the front and incorporating multiple Girls Aloud logos which were takes on ‘Dolby’ ‘SurroundSound’ and PG guide logos.

Inspired by ’60s film posters, the first sleeve we designed and photoshoot art directed was The Show. Working with photographer Simon Clemanger we shot the Girls separately in the studio on white infinity curves in the studio, improvising with filmic props, we cut out the polaroids to get a feel for the way the individual shots would work together (above). 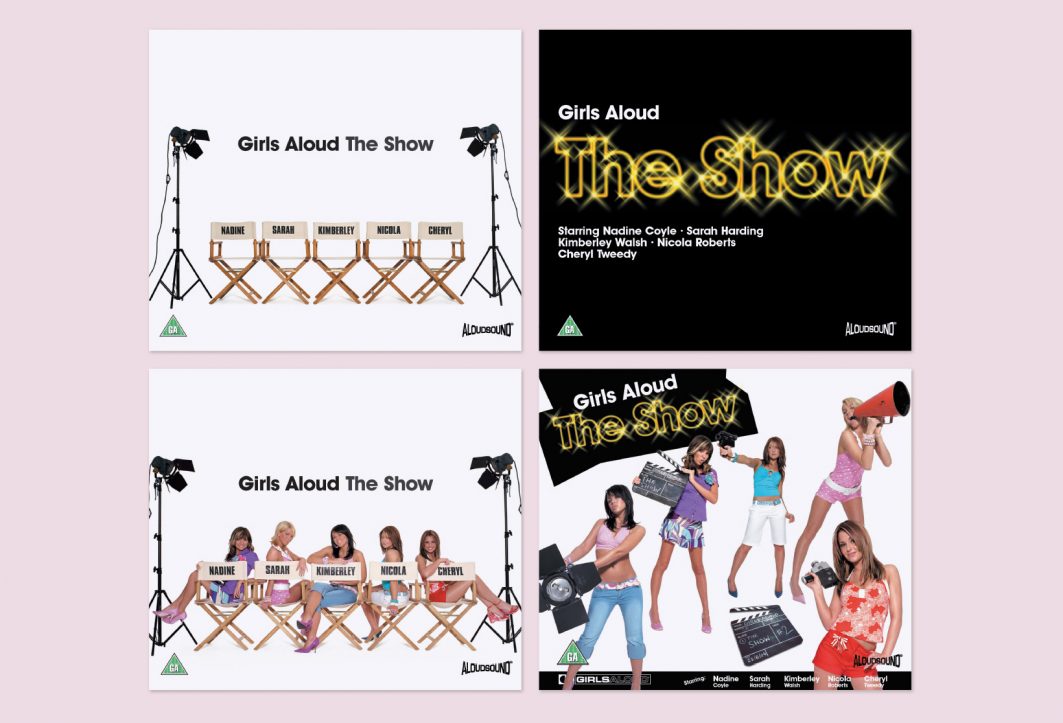 We developed a graphic rhythm for the single designs which came from What The Neighbours Say? campaign: There were always two CD promos (above, top row) and two commercial releases (bottom row). For the CD#1 promo we’d photograph an abstract representation of the Girls. For CD#2 promo we’d ‘logo up’ the song title. We’d always go to town with the CD#2 commercial – incorporating CD#2 promo elements and making it more of a collectable release. 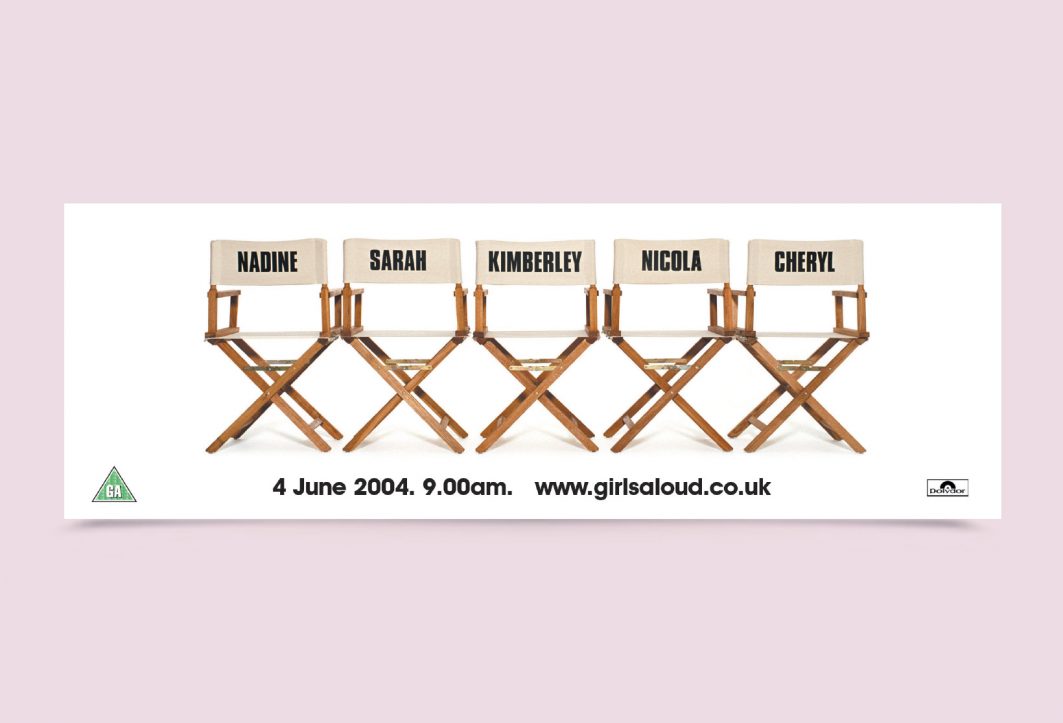 Polydor ran a series of teaser adverts prior to the release of The Show (above is the ad for Music Week magazine).
The Show debuted at No 2 in the UK charts. The new campaign had started! 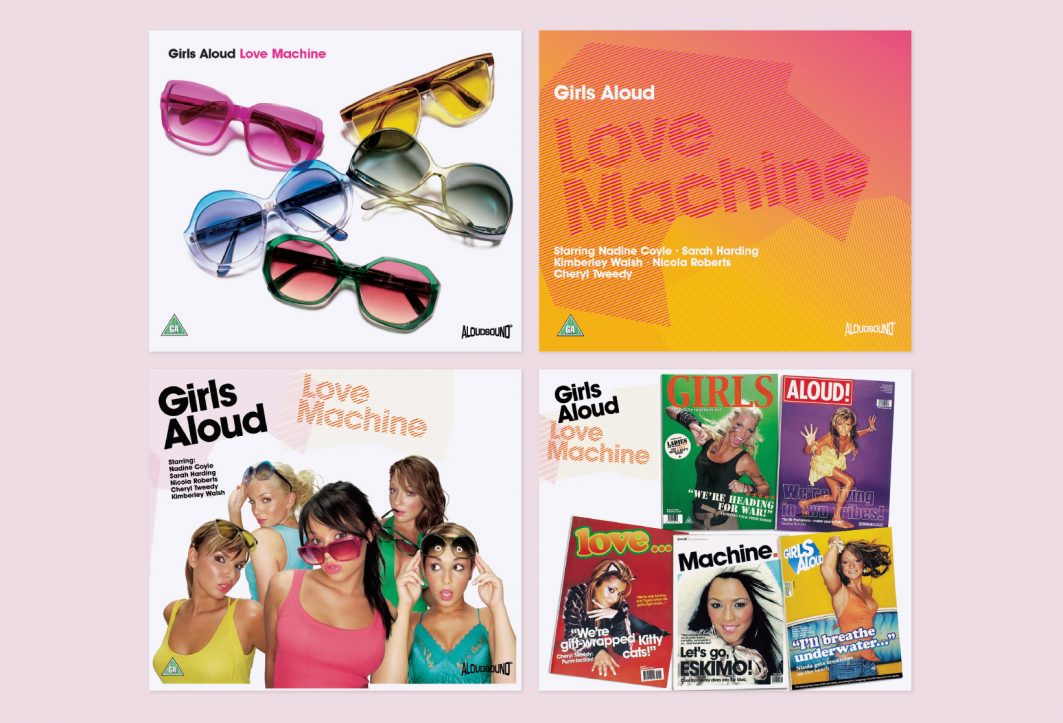 The second single Love Machine was released in October 2004. We worked with photographer Peter Beavis on this single and the rest of the WWTNS? campaign. Love Machine remains our favourite release (along with Biology), primarily for the CD#2 commercial as a lot of work went into this cover.

The highly visual lyrics were used to give each Girl their own magazine cover star personality – Pete shot the band on different colour coloramas, then we designed five different magazine covers, dropped each Girl into their magazine, printed high res run outs and mounted each one onto existing magazines, and then had them reshot for the actual single cover. We’ve often been asked why we went to that much bother when digital manipulation would have done the job and the reason was – we just loved the realism; the combination of analogue and digital to really achieve that level of authenticity. Love Machine debuted at No2  in the charts. 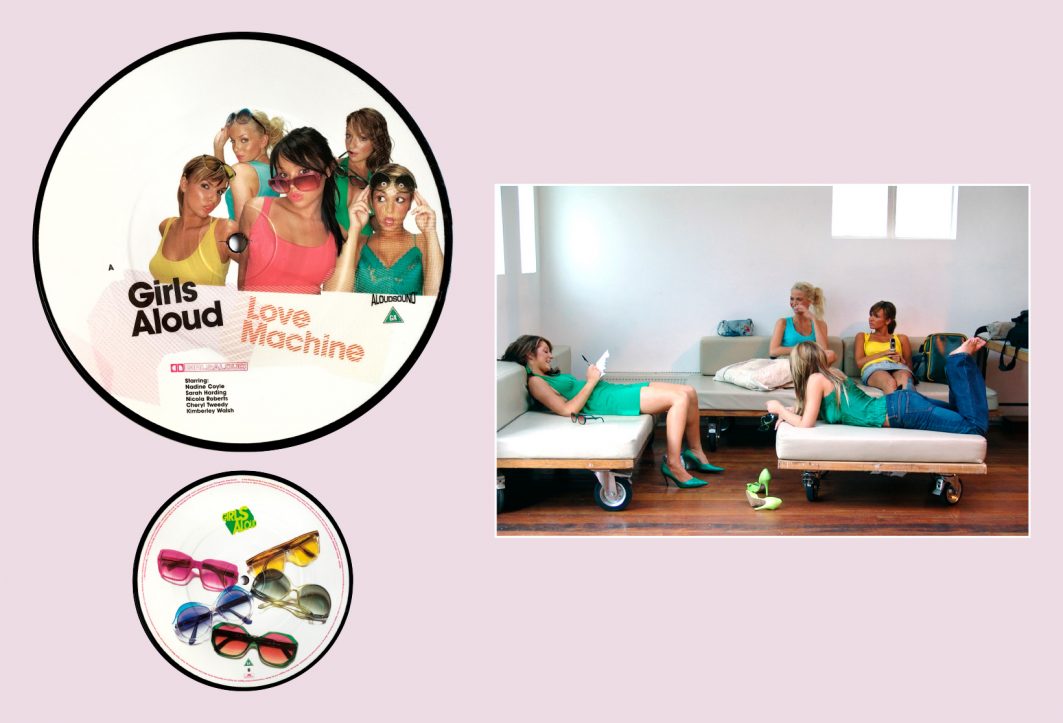 Above shows the Love Machine 7″ picture disc, and a favourite shot of Nicola, Sarah, Cheryl and Nadine relaxing off set while Kimberley was being shot individually for the CD1 sunglasses cover. 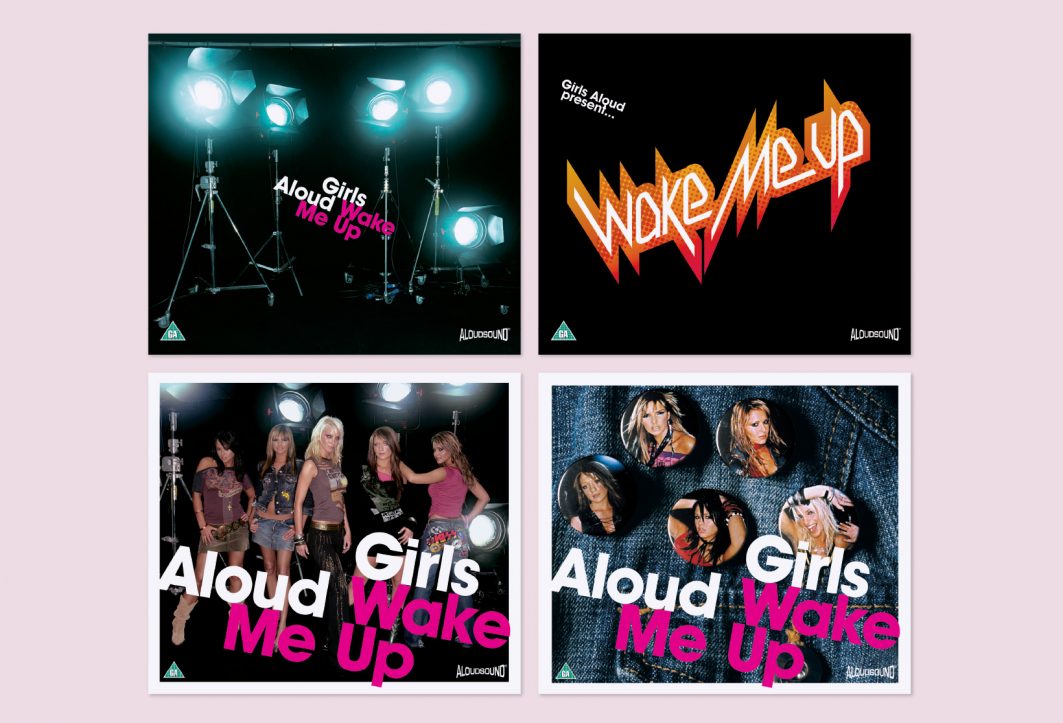 Art directing photographer Peter Beavis was great fun for this single. While the Girls were in make up and styling, we set about shooting the lights for CD#1 promo (above, top left) and from the test polaroids alone (this was all pre-digital photography) we knew this was going to be an atmospheric set.

For each single one of the Girls would really pick up the vibe of the idea and we’d rotate the line ups to add some variation in the line up over the campaign. Sarah made this one her own, her blonde hair rocking out with the light flares. For CD#2 commercial (above, bottom right) we actually made badges and photographed them on a denim jacket – again for the authentic look. 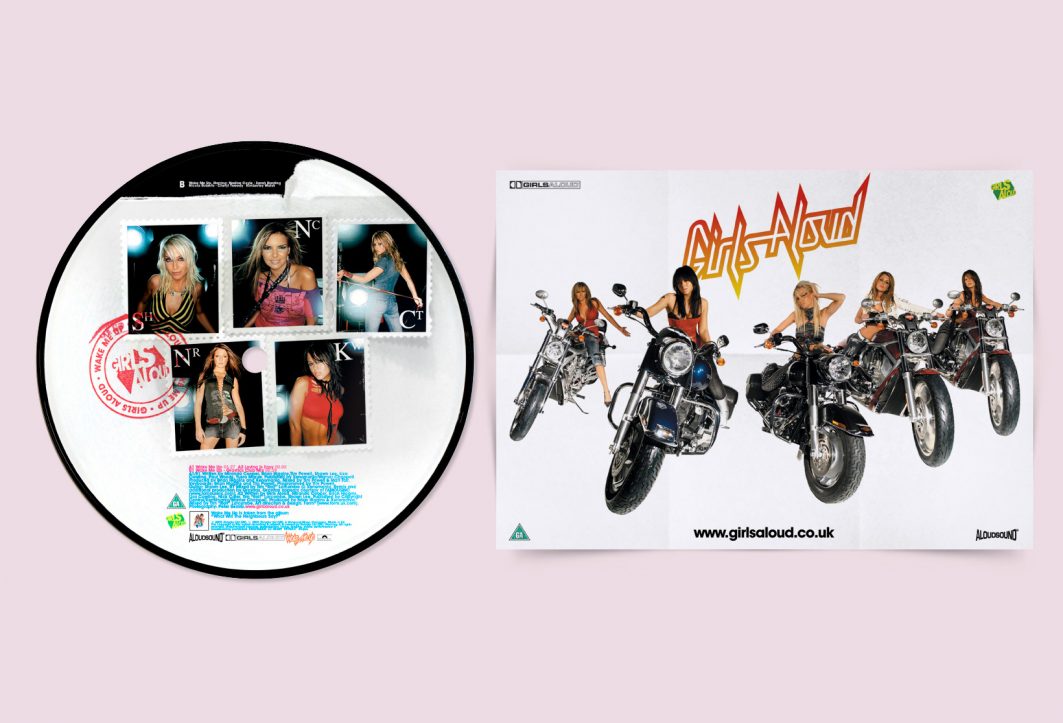 Above shows Wake Me Up 7″ picture disc, and limited edition fold out poster. 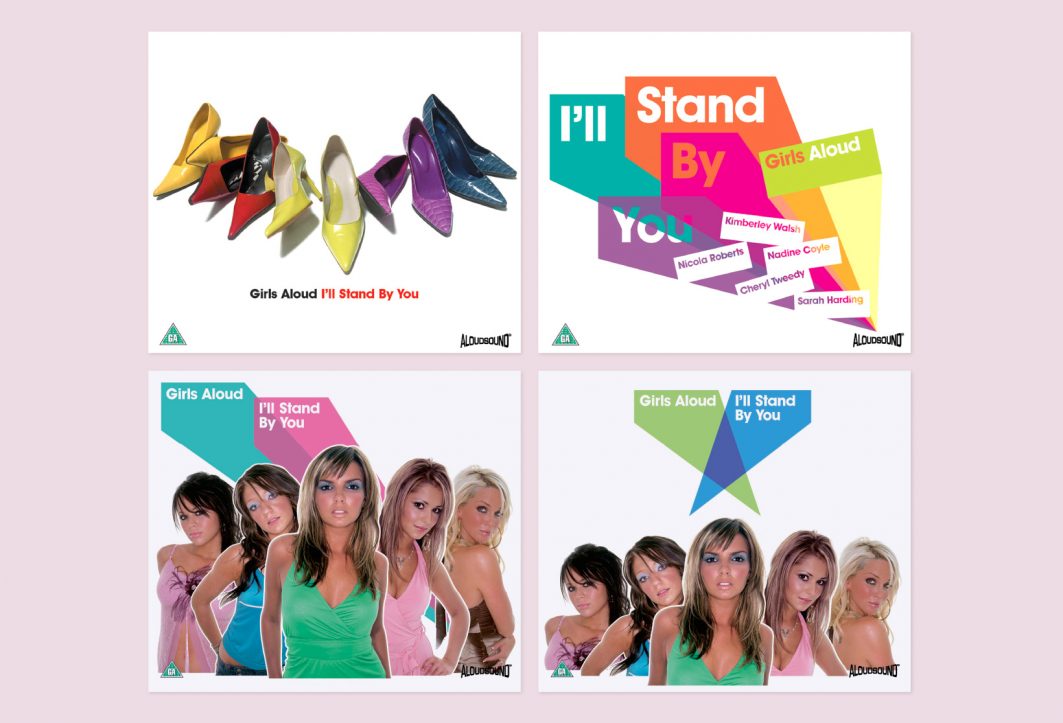 I’ll Stand By You was shot at the same time as Love Machine and WWTNS?, and we created a ‘cut out’ white keyline effect (above) – largely influenced by the test polaroids of the Girls we’d cut out at the shoot and play around with to start seeing how the covers would look. There was something subtly “punky” about this idea we liked. 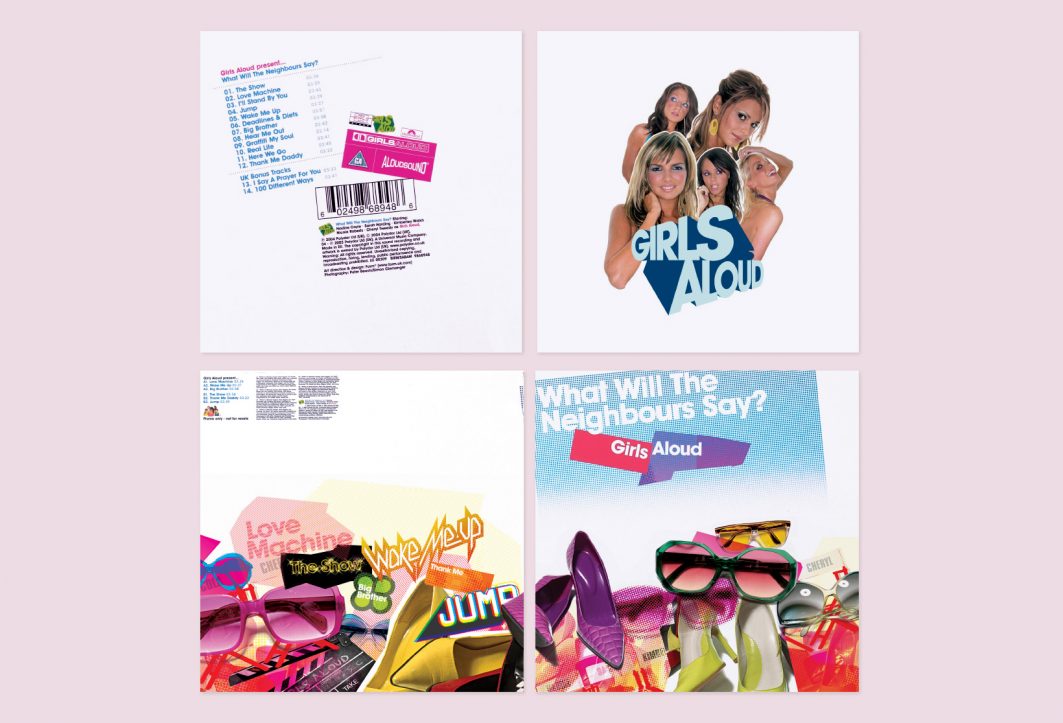 Above shows the What Will The Neighbours Say? album – commercial CD and promo 12″ artwork. 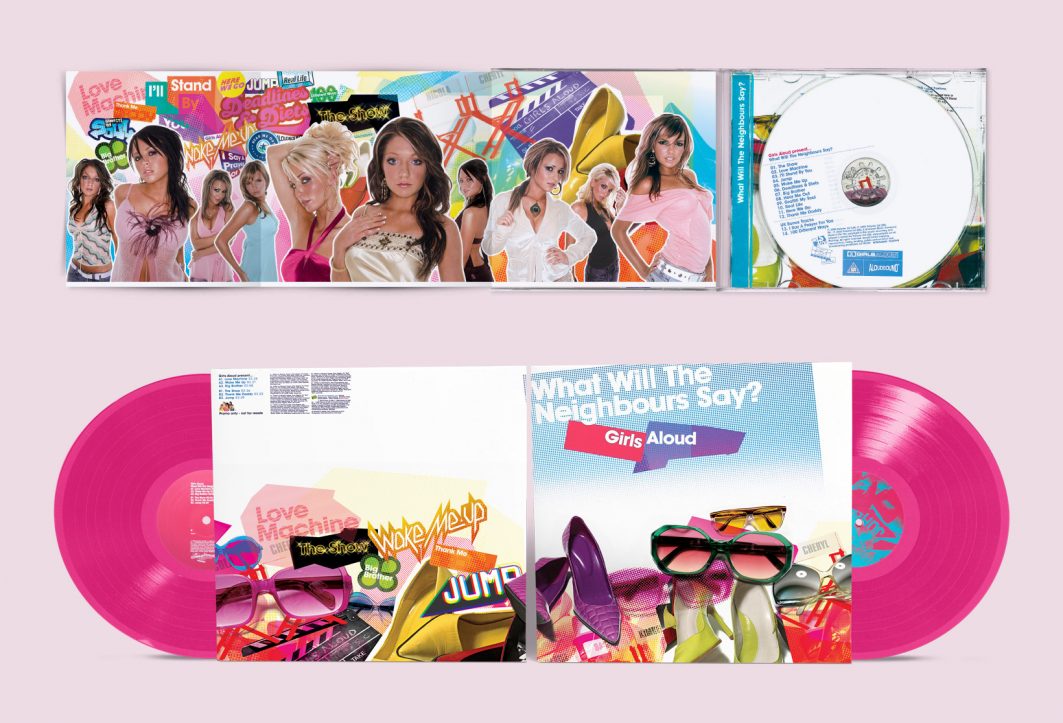 What Will The Neighbours Say? commercial CD roll fold booklet (above, top) and promo 12″ artwork with pink vinyl (above, bottom). As we had created title logos for the singles, we designed a different logo for every track title, and combined them with the abstract CD promo images to produce a pop art riot of colour and texture. For the CD roll fold booklet the cut outs of the Girls were incorporated as a way of bringing the whole campaign full circle.

The album WWTNS? was released in November 2004, going double platinum in the UK and Ireland. 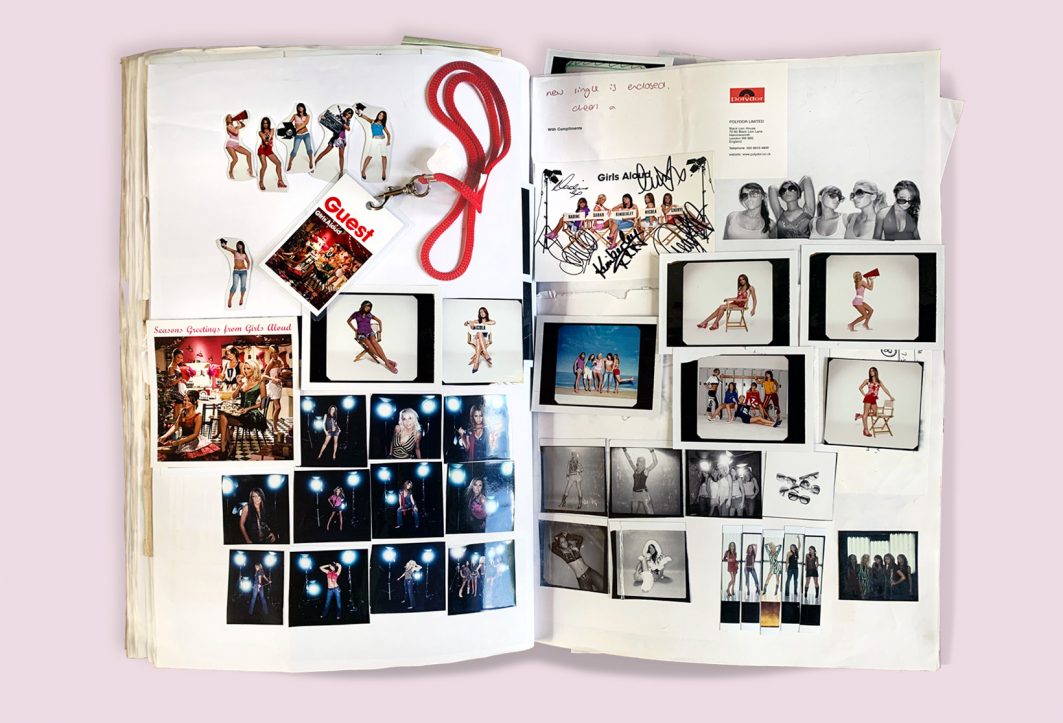 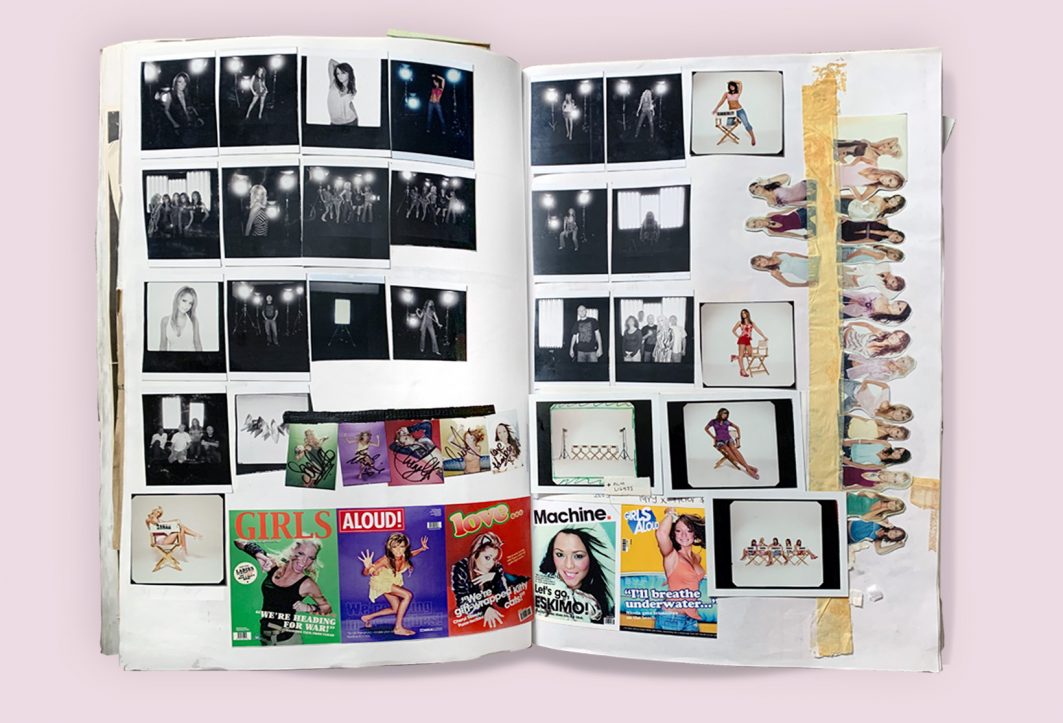 Form partner Paul West has always been a hoarder and kept hundred of scrapbooks and sketchbooks. The above images show some pages from his scrapbook which covers music shoots, rave flyers and cultural hoardings from the period 1990 – 2012. This same book is a treasure trove and contains behind the scenes polaroids, out-takes and mementoes from photo shoots with Atomic Kitten, East 17, (more on them here) 5ive, All Saints and a whole lot more. The Girls’ line-up on the right hand page above (physically cut out at the WWTNS? shoot) is what gave us the idea to replicate the cut out feel of the imagery for the album and I’ll Stand By You. 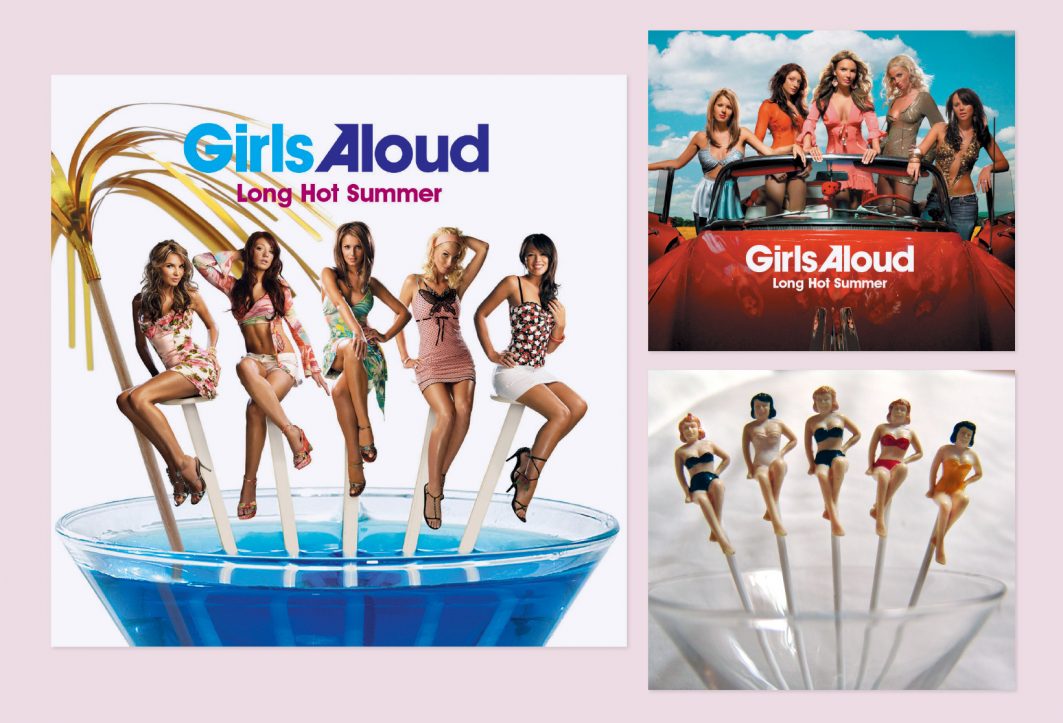 In 2005 the Girls launched the Chemistry album campaign, kicking off with the single Long Hot Summer, released 22 August. After a hugely successful WWTNS? campaign we were overflowing with shoot ideas. Form partners Paul and Paula (both being avid collectors) had bought a collection of 1950’s bikini-clad cocktail sticks. They came to mind when we started work on Long Hot Summer so we ran these by the Girls and the label as the inspiration for the CD2. They loved the idea, so working with fashion photographer Sean McMenomy we shot Nadine, Nicola, Cheryl, Sarah and Kimberley on chairs and then comped them over a cocktail ‘pool’ with a golden garnished palm tree. For CD1 we hired a beautiful Cadillac. 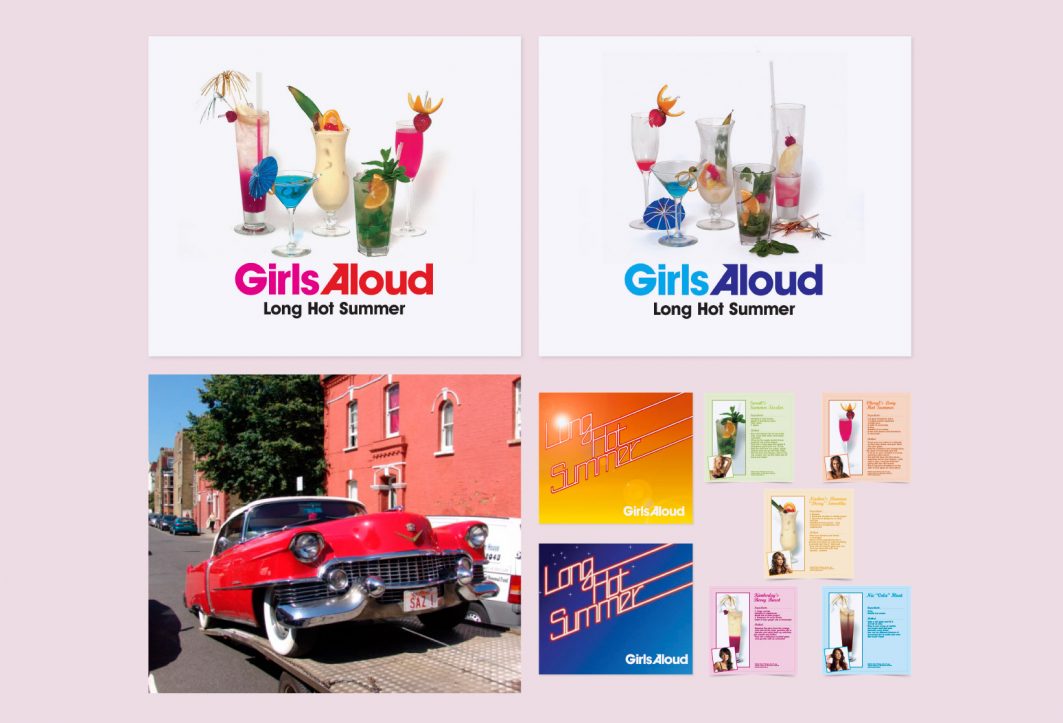 Above top row: Cover design ideas which didn’t make it. We shot five cocktails to represent each Girl – our suggestion for CD#1 promo were full cocktails and CD#2 promo were the cocktails having been drunk! The final sleeve was in fact the neon-esque typography of Lonh Hot Summer by day and night (above, bottom right). Bottom left: the beautiful Cadillac arriving at the shoot. 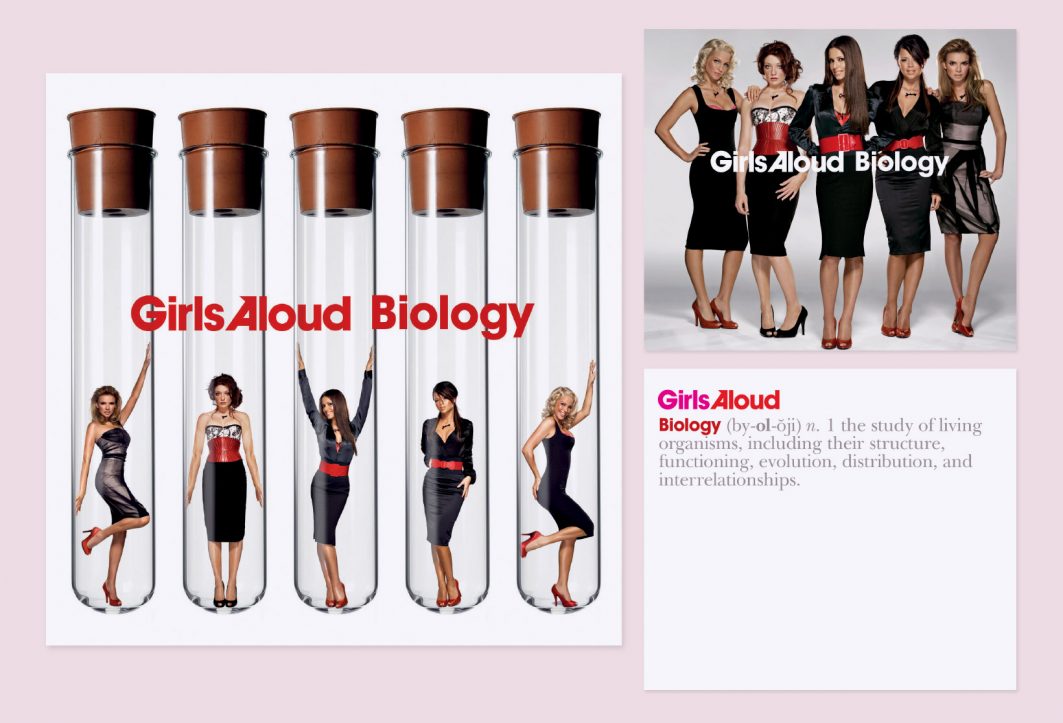 The second single from the Chemistry album campaign was Biology. CD#2 (above, bottom left) remains our favourite Girls Aloud cover and we wanted to deliberately homage a Punk classic – Germfree Adolescents by X-Ray Spex (below, originally shot by the late, great, Trevor Key). We loved the idea that the Girls could reimagine this iconic cover. 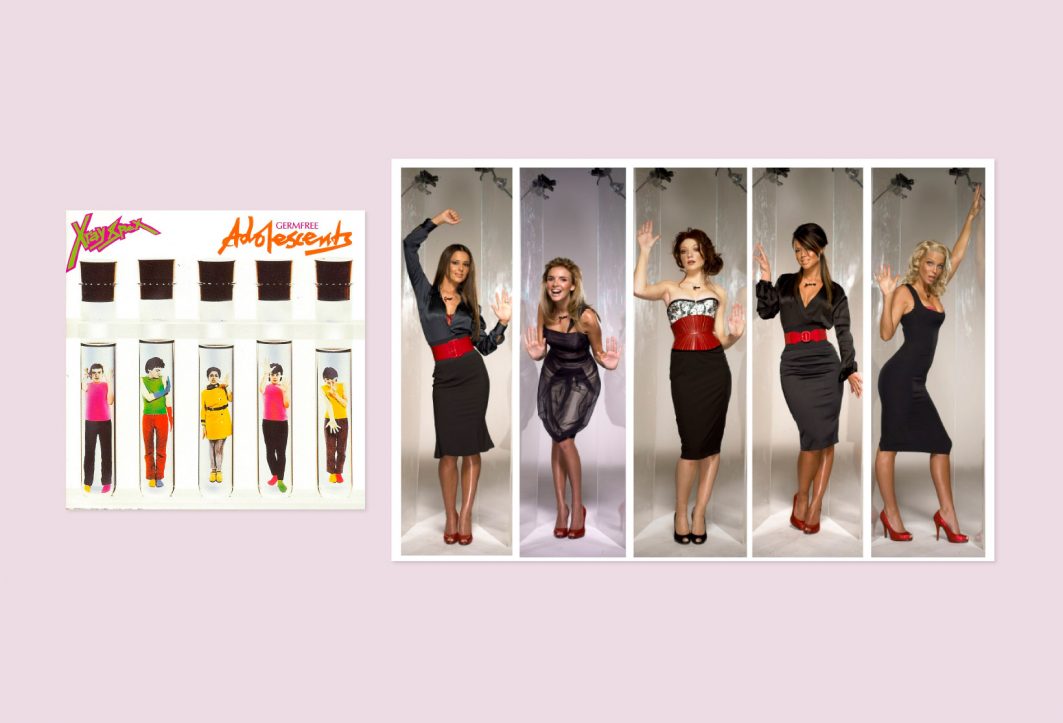 We set up a perspex corridor for the Girls to improvise within (above). From the resulting shots we comped them into a test tube and the rest speaks for itself. CD#2 also features our favourite GA track – Nobody But You, a total Xenomania classic. Just a perfect release. 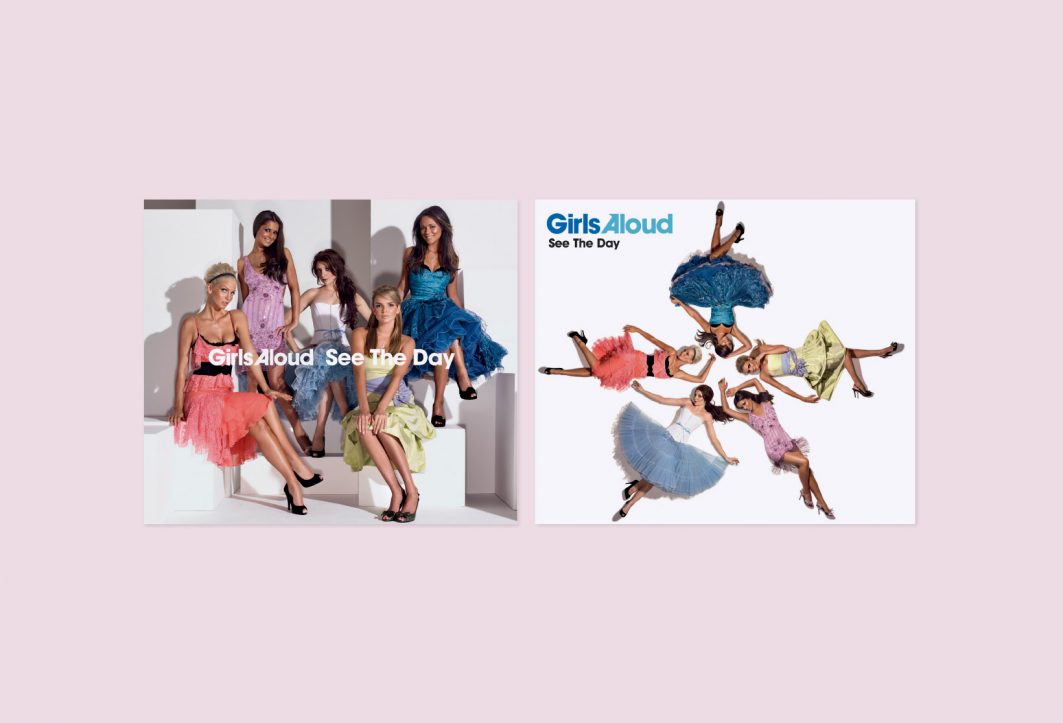 The covers of See The Day (above) were inspired by the aerial shots often seen in Hollywood greats from the 50’s. These were again photographed by Sean McMenomy with our art direction. 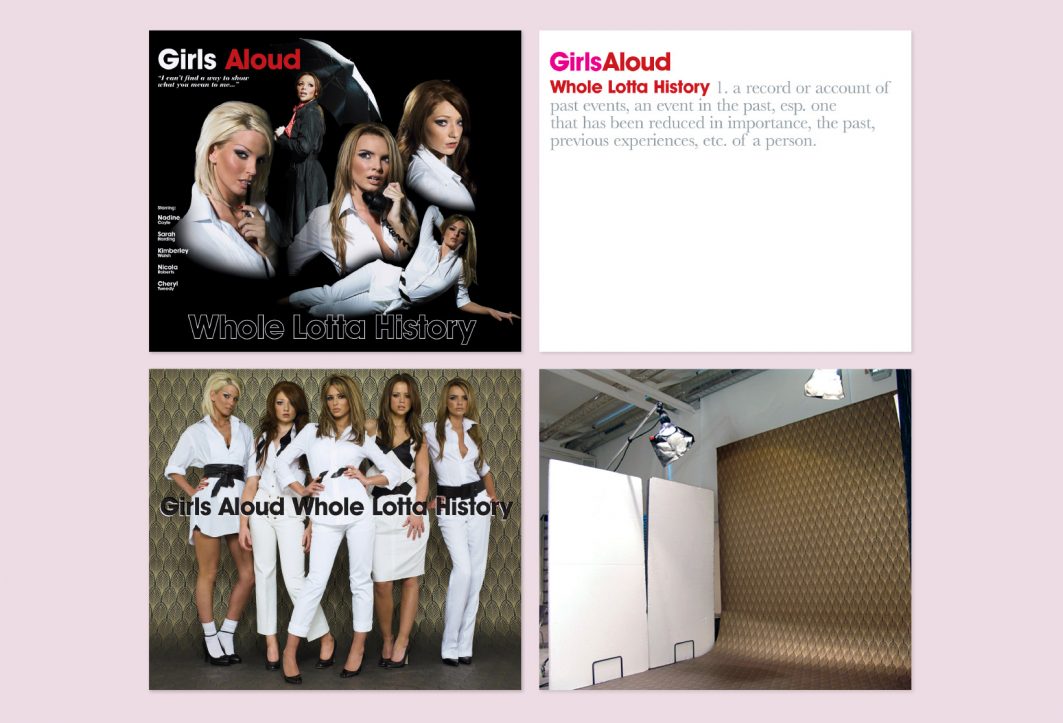 For Whole Lotta History we collaborated with photographer Elisabeth Hoff, who also shot the Chemistry album. We loved the idea of a Biba-esque gold wallpaper backdrop which would really pop while the girls stood in front of it proud dressed in monochrome (above, bottom). For CD2 we created a dramatic composition influenced by Film Noir posters, with the Girls (again in white) looking out of a black background. 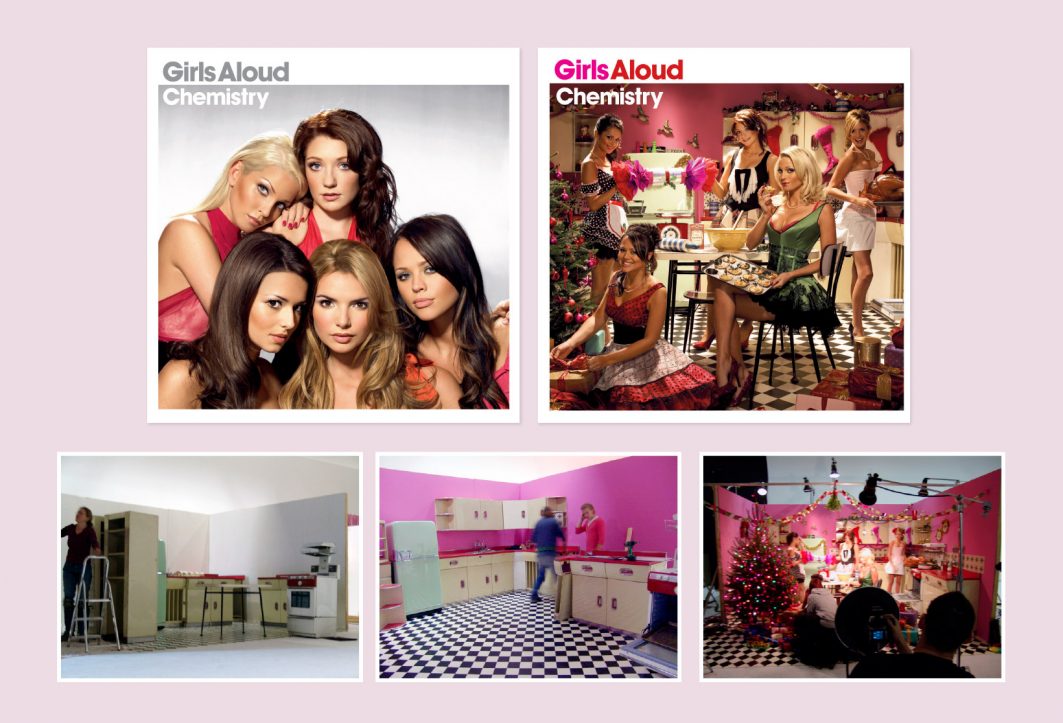 The Chemistry album and the limited edition Christmas album (which was a bonus disc) was released in December 2005 and involved building a kitchen set in a Mid-century modern style. 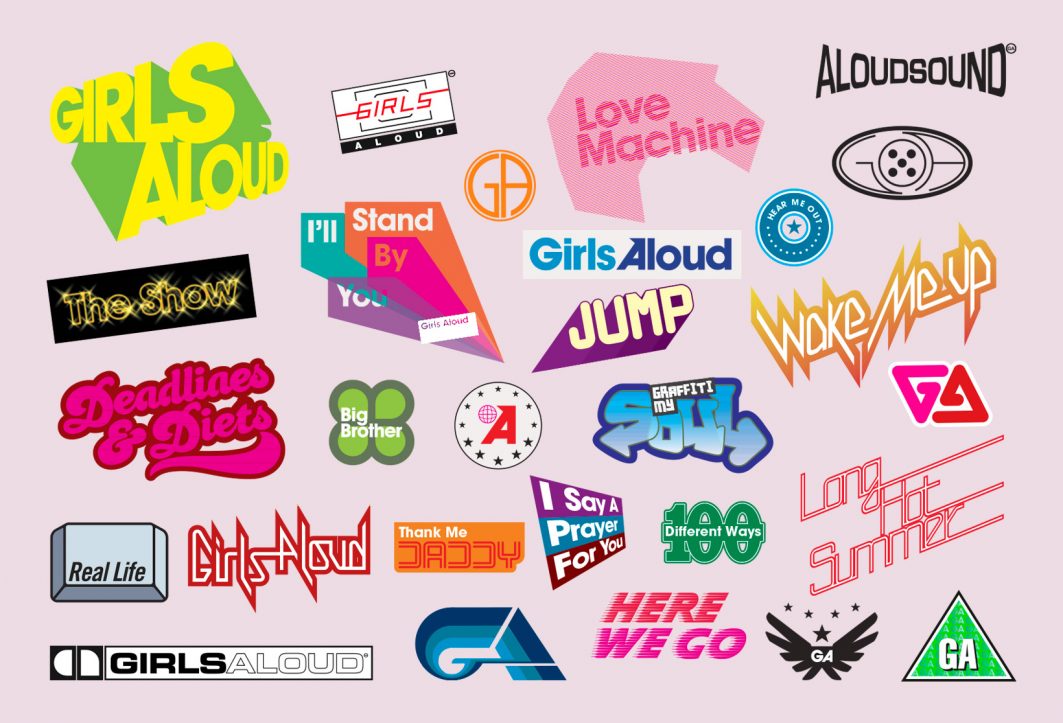 Above: Girls Aloud logos we created for the WWTNS? and Chemistry campaigns.

Polydor were always fantastically open to our ideas, which came thick and fast from every source—film, pop art, fashion, comics, Japan; and we even popified a punk classic. We enjoyed every minute of the Girls Aloud design work. We’ve never been afraid of POP as some designers seem to be, nor see it as a dirty word. We worked with the finest photographers, stylists, producers and record label at that time, who challenged us to turn what some may see as transient into something far more memorable and iconic. The fact we still get emails about the sleeves and design work from fans to this day testifies to this and we helped create a stronger brand around the band and designed some classic covers along the way.

Hear Paul waxing lyrical about our design work for Girls Aloud in Episode 6 of the Aloudpodcast which drops on 23 May 2022 – listen to it on Spotify or your usual podcast platform.