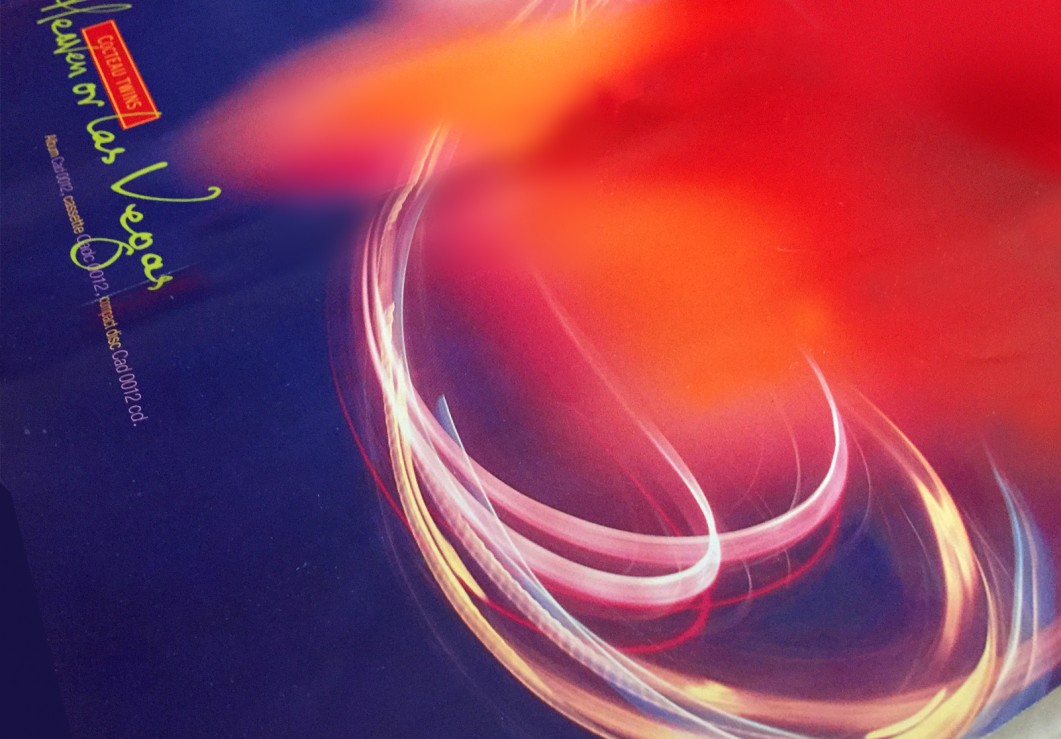 Heaven or Las Vegas is 26 today

As a design student, Form partner Paul West had written his thesis on the marriage of album cover art and the music it packaged, managing to interview 4AD design legend and true inspiration Vaughan Oliver from 23 envelope (V23). A  friendship was struck – culminating in Vaughan asking Paul to work on Blue Bell Knoll (Cocteau Twins fifth album).

For ‘HOLV’, Paul collaborated with photographer friend Andy Rumball (they had met at college in the early 80’s through a shared passion for music). It was quite a long process reaching a creative solution that the band liked for this album release, which was really about ‘capturing the ethereal’ as Robin put it. They spent literally days – and nights – in a makeshift studio (a kitchen) shooting sparklers, colour fades, clothing – anything to get something textural and ‘otherworldly’. Finally, they experimented with flicking Christmas tree lights backwards and forwards on a long exposure over colour backdrops. This was long before the instancy of digital so Paul and Andy had no idea how these experiments would turn out until the film went off to be processed. The final negatives came back, photos were printed up, cropped, and ‘positional’ album type was hand painted on an acetate overlay – all to create a mock-up for the sleeve. The dummy visuals were presented to the band on the last day scheduled for a creative decision. Robin, Simon and Elizabeth liked it. The album format packaging and the single Iceblink Luck revolved around those handful of shots. Heartbreakingly, much of the original artwork was destroyed by a flood a few years ago (we know…), however we hope you enjoy some of the images below. It was pretty amazing going through all the artwork files once again, as it happens… Typesetting Cocteau Twins. For the album, Paul created ‘Heaven or Las Vegas’ by hand and combined this with Copperplate Gothic for the band name. For merchandise it was swapped it around – so Cocteau Twins appeared in the script. These were the days of “lick and stick” artwork so alterations were made by the scalpel