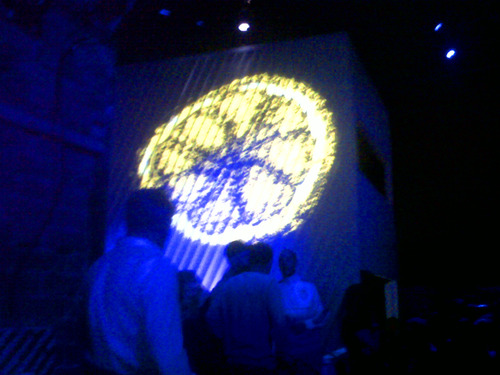 I never would have thought I’d see The Stone Roses in a venue as small as The Village Underground, Shoreditch. The sound bounces off the bricks and resonates brilliantly. No wonder Reni was loving it so much. Due onstage at 11pm, The Roses came on at half past with Ian saying “We just broke up again, but now we’re back together.” They came on to a huge applause, starting with ‘Waterfall’ and the band were as tight as ever. I was pleasantly surprised to hear they were playing a full set, including a mesmerising 20 minute version of Fools Gold. Here is the nights setlist:
Waterfall
Don’t Stop
Shoot You Down
Fools Gold
Something’s Burning
Love Spreads
Made Of Stone
This Is the One
She Bangs The Drums
I Am The Resurrection An absolutely brilliant night rounded off with meeting Bobby Gillespie. I think this is confirmation that I need to upgrade to an iPhone.